E. Shaver is proud to partner with the Savannah Book Festival to bring you a series of virtual author events this fall. We are offering free media mail shipping on these books. Choose media mail shipping during checkout and the cost will be deducted when we process the order. 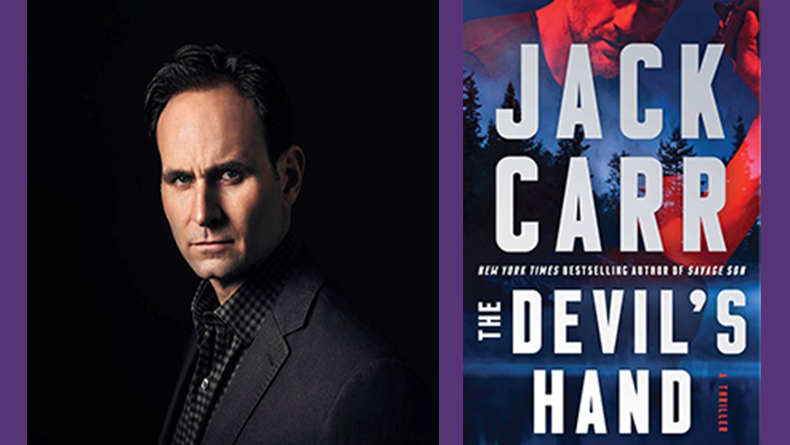 Jack Carr is the New York Times bestselling author of The Terminal List, True Believer, Savage Son, and The Devil’s Hand.  He is currently working on scripts for the Amazon series adaptation of his first novel, The Terminal List, starring Chris Pratt which is scheduled to hit screens in 2021.

Carr is also a former Navy SEAL who led special operations teams as a Team Leader, Platoon Commander, Troop Commander, and Task Unit Commander. Over his twenty years in Naval Special Warfare he transitioned from an enlisted SEAL sniper, to a junior officer leading assault and sniper teams in Iraq and Afghanistan, to a platoon commander practicing counterinsurgency in the southern Philippines, to commander of a Special Operations Task Unit in the most heavily influenced section of southern Iraq throughout the tumultuous drawdown of U.S. Forces.  Now, Carr is a writer and consultant in the outdoor and tactical industries, a sought-after military analyst, and regularly speaks on leadership and team building to business across industry.

Releasing on April 13, The Devil's Hand  is the fourth thriller in the “so powerful, so pulse-pounding, so well-written” (Brad Thor, #1 New York Times bestselling author) Terminal List series which follows former Navy SEAL James Reece as he is entrusted with a top-secret CIA mission of retribution twenty years in the making.

With Jack Carr’s signature “absolutely intense” (Chuck Norris) writing and “gripping authenticity” (The Real Book Spy), The Devil’s Hand is a riveting and timely thriller that will leave you gasping for breath.

Books from previous SBF Virtual Events are still available for purchase below!

Hymns of the Republic: The Story of the Final Year of the American Civil War (Paperback)

Pappyland: A Story of Family, Fine Bourbon, and the Things That Last (Hardcover)

The Vanishing Half: A Novel (Hardcover)

Perestroika in Paris: A novel (Hardcover)

The Law of Innocence (A Lincoln Lawyer Novel #6) (Hardcover)

Lessons From Lucy: The Simple Joys of an Old, Happy Dog (Hardcover)

Near Dark: A Thriller (The Scot Harvath Series #19) (Hardcover)