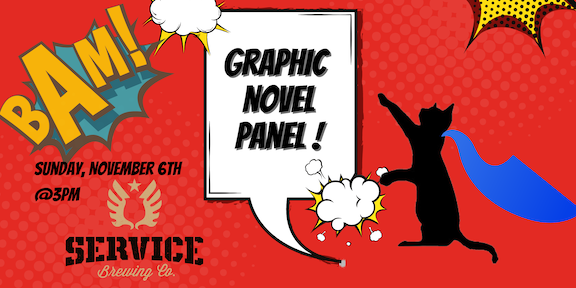 Please j﻿oin us for this free event at Service Brewing Co. on Sunday, November 6th at 3pm for beer and a lively discussion on and around the wonderful world of graphic novels.

T﻿here will be a Q&A at the end of the panel. Bring your questions!

W﻿e look forward to seeing you there!

Rashad Doucet is from New Orleans by way of Eunice. He is Ville Platte, Louisiana, native who's been drawing comics since his grandma gave him a pencil and some paper to keep quiet during church. He's known for his work with Oni Press on comics like Invader Zim, Rick and Morty, and Alabaster Shadows. He's also worked with DC Comics, Stela, and most recently was a part of the Eisner-winning Elements: Fire Anthology. Rashad is currently a professor of sequential art at the Savannah College of Art and Design in Savannah, Georgia, where he can often be found listening to '80s power ballads and watching way too much anime.

Jamie Jones is a cartoonist and illustrator living in Savannah, GA. Previous works include: Quarter Killer with writers Danny Lore and Vita Ayala (Comixology Originals), Kicking Ice written by Stephanie Phillips (Ominous Press), and Tales of MFR with Matt Sardo (monkeysfightingrobots.com),He is the current can illustrator for 81 Bay Brewing Co. in Tampa, FL. Alongside his freelance work, Jamie has been self publishing his pulp action-adventure comic, The Baboon , under his Bow Tie Press imprint