Ikat from Timor and Its Outer Islands: Insular and Interwoven (Hardcover) 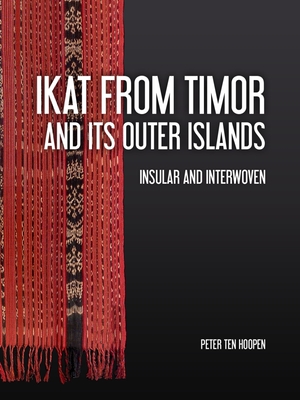 Ikat from Timor and Its Outer Islands: Insular and Interwoven (Hardcover)


Email or call for price.
This is the first study to focus on ikat of the Timor region from a technical perspective, including microscopy and design analysis of asymmetry, an understudied subject. Paradoxically, this technical perspective highlights the human factor. Focused on the last century of the colonial period, we see the weaver's decisions in close-up, as if we are sitting next to her. This yields rich insights, not just in materiality, but also in the weavers' creativity.

Asymmetry is widely distributed in the region, yet has largely been ignored. This is curious, because asymmetry is highly interesting: it goes against ikat's technical diktat (which prescribes the production of two identical panels in parallel), hence requires extra work. Seven distinct ways to achieve asym­metry are differentiated, including visual tricks and illusions, flagrant displays of virtuosity, and intellectual superiority. On Sumba, women of the nobility made thrilling and amusing efforts to hide their virtuosity, dyeing into their men's cloths tiny visual devices, secret keys, which revealed that their work was not just good, but luar biasa, out of the ordinary. Ironically, because these late 19th- and early 20th-century dyers were such great masters at hiding their virtuosity, it remained overlooked by generations of researchers.

Taking up Marie Jeanne Adams's 1969 call, so far unheeded, to deepen the study of Indonesian ikat textiles by means of microscopy, the author shot thousands of micro-photographs, allowing a study of yarn development over time, as well as the differentiation of 21 distinct weave types, a number far exceeding expectation, and their distribution across 41 ikat weaving regions in the Indonesian archipelago.

In the final chapter, the author analyses what may have spurred the weavers of the region to create their most intricate, most time consuming, feats of artistry, and develops a view of these women as far more inventive and intelligent than they have been credited with before - and more assertive, using ikat's prestige to spin their men into a web of taboos and prescriptions.