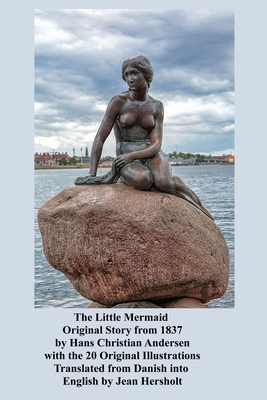 Here we are reprinting the original Little Mermaid, not the Disney production.

The story follows the journey of a young mermaid who is willing to give up her life in the sea as a mermaid to gain a human soul. The tale was first published in 1837 as part of a collection of fairy tales for children. The original story has been a subject of multiple analyses by scholars. These analyses cover various aspects of the story from interpreting the themes to discussing why Andersen chose to write a tragic story with a happy ending. It has been adapted to various media, including musical theater, anime, ballet, opera, and film. There is a statue portraying the mermaid in Copenhagen, Denmark, where the story was written and first published.

The Little Mermaid lives in an underwater kingdom with her widowed father (the sea king or Mer-King), her dowager grandmother, and her five older sisters, each of whom had been born one year apart. When a mermaid turns fifteen, she is permitted to swim to the surface for the first time to glimpse the world above. When the sisters become old enough, each of them visits the upper world one at a time every year. As each returns, the Little Mermaid listens longingly to their various descriptions of the world inhabited by human beings.

The Little Mermaid finds the prince's statue under the sea. When a mermaid turns fifteen, she is permitted to swim to the surface for the first time to glimpse the world above, and when the sisters become old enough, each of them visits the upper world one at a time every year. When the Little Mermaid's turn comes, she rises up to the surface, watches a birthday celebration being held on a ship in honor of a handsome prince, and falls in love with him from a safe distance.

A violent storm hits, sinking the ship, and the Little Mermaid saves the prince from drowning. She delivers him unconscious to the shore near a temple. Here, she waits until a young woman from the temple and her ladies in waiting find him. To her dismay, the prince never sees the Little Mermaid or even realizes that it was she who had originally saved his life.