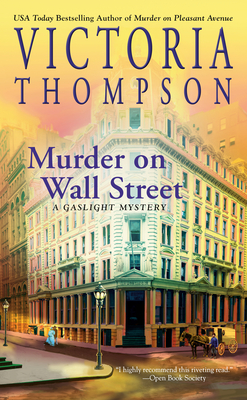 This is book number 24 in the A Gaslight Mystery series.

Midwife Sarah Brandt Malloy and her detective husband, Frank, must discover who killed a prominent—but despised—society banker before an innocent family is destroyed in Murder on Wall Street, an all-new Gaslight Mystery in the USA Today bestselling series.

Reformed gangster Jack Robinson is working hard to bolster his image in Gilded Age New York City society as he prepares to become a new father. But when Hayden Norcross, the man who nearly ruined his wife, is shot in cold blood, Jack knows the police will soon come knocking on his door. Frank Malloy has to agree—things don’t look good for Jack. But surely a man as unlikeable as Hayden had more than a few enemies. And it’s soon clear that plenty of the upper echelon as well as the denizens of the most squalid areas of the city seem to have hated him.

Sarah and Frank have their work cut out for them. As the daughter of the elite Decker family, Sarah has access to the social circles Hayden frequented, and the more she learns about his horrific treatment of women, the more disturbed she becomes. And as Frank investigates, he finds that Hayden had a host of unsavory habits that may have hastened his demise. But who finally killed him? Sarah and Frank must put the pieces together quickly before time runs out and Jack’s hard-won new life and family are ripped apart.
Victoria Thompson is the Edgar® and Agatha award-nominated author of the Gaslight mysteries, the Counterfeit Lady series, as well as numerous historical novels. She lives in the Chicago area with her family.