No Land to Light On: A Novel (Paperback) 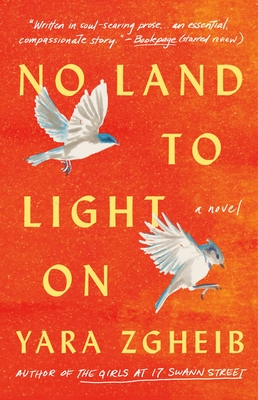 No Land to Light On: A Novel (Paperback)

“Wow. How to find words that convey just how beautifully written and heartbreaking this novel is. I held the book close to my chest as I read it slowly, taking time to absorb each chapter. This book needs to be read, loved, and shared broadly.”
— Stefanie Lynn, The Kennett Bookhouse, Kennett Square, PA

From the author of The Girls at 17 Swann Street comes a “masterful story of tragedy and redemption” (Hala Alyan, author of Salt Houses) “written in soul-searing prose” (BookPage, starred review) about a young Syrian couple in the throes of new love on the cusp of their bright future when a travel ban rips them apart on the eve of their son’s premature birth.

Sama and Hadi are a young Syrian couple in love, dreaming of their future in the country that brought them together. Sama came to Boston years before on a prestigious Harvard scholarship; Hadi landed there as a sponsored refugee from a bloody civil war. Now, they are giddily awaiting the birth of their son, a boy whose native language will be freedom and belonging.

When Sama is five months pregnant, Hadi’s father dies suddenly, and Hadi decides to fly back to Jordan for the funeral. He leaves America, promising his wife he’ll be gone only for a few days. On the date of his return, Sama waits for him at the arrivals gate, but he doesn’t appear. As the minutes and then hours pass, she becomes increasingly alarmed, unaware that Hadi has been stopped by US Customs and Border Protection, detained for questioning, and deported.

Achingly intimate yet poignantly universal, No Land to Light On is “a tense, moving novel about the meaning of home, the risks of exile, the power of nations, and the power of love” (Kirkus Reviews).
Yara Zgheib is the author of No Land to Light On and the critically acclaimed The Girls at 17 Swann Street, which was a People Pick for Best New Books and a BookMovement Group Read. She is a Fulbright scholar with a master’s degree in security studies from Georgetown University and a PhD in international affairs in diplomacy from Centre d’Études Diplomatiques et Stratégiques in Paris. Learn more at YaraZgheib.com.
“Zgheib writes so lyrically about rootlessness, separation and a fierce longing for home that it makes the tragedy of war that much easier to bear. Sama and Hadi will always hold a special place in my heart.”
— Alka Joshi, New York Times bestselling author of The Henna Artist and The Secret Keeper of Jaipur

“A masterful story of tragedy and redemption, an entire history told through the prism of a single Syrian couple, beginning and ending with love.”
— Hala Alyan, award-winning author of Salt Houses and The Arsonists' City

“In elegant prose, Zgheib skillfully mingles her protagonists’ memories with a nail-biting account of their 2017 ordeal to craft a narrative rich in metaphors and complex, believable characters.”
— The Washington Post

“Written in soul-searing prose, No Land to Light On is an essential, compassionate story.”
— BookPage (starred)

“Zgheib’s prose is sensory, piquant with the scent of spices even as it captures the sorrow of living in exile while war destroys your homeland. But the novel’s real power is in humanizing the cruelties and injustices visited on migrants caught up in the travel ban.”
— Library Journal (starred)

“Zgheib has created a tense, moving novel about the meaning of home, the risks of exile, the power of nations, and the power of love.”
— Kirkus Reviews

“With raw emotion and aching clarity, Zgheib depicts a family trying to make its way back to each other as powers beyond their control shift their lives like gale force winds.”
— Newsweek