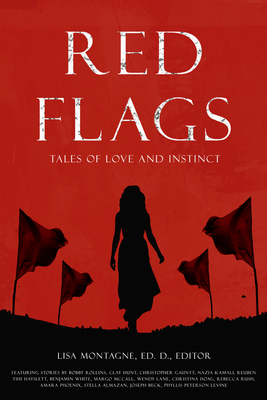 — From Featured Pre-Orders
An anthology of tales and stories about signs and signals; seen, missed, and misunderstood on the foreshadowing of life’s relationships that sometimes makes the hairs on the back of one’s head stand up.

Have you ever been in a situation where all of those internal warning signals went off but you went forward anyway? Or in a situation where you started to drive forward and then something told you to stop? This anthology is a collection of stories of similar situations that our authors experienced. Read on to find out about their own red flags.
Adrianne Beer is from Yellow Springs, Ohio, and currently lives in Tucson, Arizona, while pursuing a master’s degree in library sciences. Her writing can be found in Moon City Review, Chicago Reader, Entropy, and elsewhere. Rebecca Rush is a writer and comedian from New London, Connecticut. She hosts Vulnerability: A Comedy Show, and she has been featured on Viceland and Funny or Die. Her work has appeared in Toho Journal, The Miami New Times, Fodor’s Travel, Big City Lit, and other outlets. She lives in Los Angeles. Https://rebeccarushcomedy.com Phyllis Peterson Levine is in her seventies. She has four children. She writes short stories and poetry, belongs to a writer’s group, and paints. Her work has been published in the Gordon Square Review, the Breakwall, Dash and Qwerty Magazine. Christina Hoag is a former journalist and survivor of an abusive relationship. Her novel Girl on the Brink was inspired by her experience and won Best of YA from Suspense magazine. www.christinahoag.com. Amara Phoenix is a native Rhode Islander currently living in Georgia. She is a freelance writer and editor, a work-from-home mom, and a bestselling author. Christopher Gauntt is a jack of many trades including acting, directing, DJ-ing, database programming, dancing, website design, composing, photoshop editing, DIY remodeling, producing, saving the world, and in this instance writing. Wendy Lane is an emerging writer and established visual artist, enchanted by synchronistic events in her life. She is writing her memoir as a series of personal essays. Nazia Kamali is an academic journal reviewer based in Dehradun, a small valley town in the foothills of the Himalayas in India. Her work has been published in FemAsia, The Whorticulturalist, Rigorous, In Parenthesis, CafeLit Magazine, Bright Flash Literary Review, and other magazines. During Benjamin White’s 22-year military career, and again when he was earning his MFA from the University of Tampa, he thought he was a poet. But he has since found out that he is not a poet at all. Ben is a witness: what he writes is testimony. Lisa Montagne, Ed.D., is a writer, artist, college professor, and educational technology specialist from Southern California. She has taught English literature and composition at University of California Irvine, Irvine Valley College, and Long Beach City College. Her fiction, creative non-fiction, and poetry have been published by Running Wild Press, the Arroyo Arts Collective, L.A. Art News Poet’s Place, The Ear, The Variant Literature Journal, and others. Bobby Rollins is (gratefully) prone to daydreams, some of which he puts into words. Updates about his writing appear @writerollins on Twitter.
"Refreshingly honest, the work steers clear from insisting people fit into discrete moral categories. A millennial Mary Gaitskill, Beer’s work is clear-eyed rather than wide-eyed."
—Daniela Olszewska, author of Citizen J and How to Feel Confident With Your Special Talents

"This is a courageous contribution to a courageous book." —Terence Hawkins, author of The Rage of Achilles and founder of the Yale Writers Workshop

"This engaging piece reveals an often-invisible crime and sheds light on a dark and twisted tale of love." —Patricia Hoolihan, author of Hands and Heart Together-Daily Meditations for Caregivers and Storm Prayers: Retrieving and Reimagining Matters of the Soul

"I hope at this point that famous librarian is dead of untreated syphilis. Rush rocks!" —Laurie Notaro, #1 New York Times best-selling author of The Idiot Girl’s Action Adventure Club and finalist for The Thurber Award for American Humor

"Delory’s voice is one you’ll want to listen to again and again. Keep your eyes on this writer – she’s one to watch." —Michelle Boyajian, author of Lies of the Heart

"Bobby Rollins' flash fiction “A Lesson in A Minute” may take only a minute to read, but its impact will stick with you for days." —David LaBounty, Blue Cubicle Press