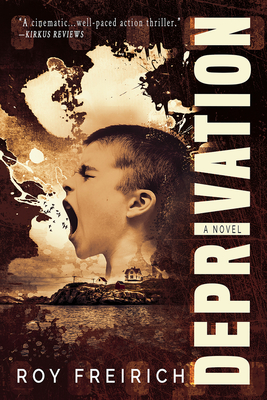 After a mysterious, silent child is found abandoned on the beach clutching a handheld video game, residents and tourists alike find themselves utterly unable to sleep. Exhaustion impairs judgment, delusions become hysteria, and mob rule explodes into shocking violence. Told from three perspectives: Chief of Police Mays tries to keep order, teenaged tourist Cort and her friends compete in a dangerous social media contest for the most hours awake, while local physician and former Harvard psychiatrist Dr. Sam Carlson battles his guilt over a student's suicide and the blurriness of his own insomnia, to try to treat the sleepless—until he and the child must flee the violent mob that blames the child for the epidemic.

Roy Freirich leads multiple lives as a writer—of lyrics, movies, and novels. His lyrics have been sung by legends Aretha Franklin, Smokey Robinson, and Patti Labelle, among many others. He’s written screenplays for Fox Searchlight, Dreamworks, Warner Brothers, and Sony, and adapted his novel, Winged Creatures, for the film, Fragments, featuring Forest Whitaker, Dakota Fanning, Guy Pearce, Josh Hutcherson, and Kate Beckinsale. He lives with his wife, ever-patient editor and frequent cowriter, Debrah, in Malibu, California. Together, they’ve written the libretto for a musical adaptation of Anne Rice’s Cry to Heaven, for Seattle’s 5th Avenue Theatre. Visit him online at www.royfreirich.com.

"In this cinematic thriller, crippling insomnia infects the tourists and residents of a small town following the appearance of a mysteriously silent orphan ... A well-paced action thriller with a wide-eyed premise that works hard to shake readers awake." — Kirkus Reviews

"On New York’s Carratuck Island, physician Sam Carlson, the hero of this chilling thriller from Freirich (Winged Creatures), is confronted with a perplexing mystery when a grimy boy, with symptoms of having been severely traumatized, shows up on the beach. The child’s refusal to talk or write down anything that would help identify him hinders efforts to reunite him with his family. His appearance seems to trigger a bizarre outbreak of insomnia on Carratuck, a baffling phenomenon that leads Carlson to fear that some sort of biohazard or terrorist weapon may be responsible. After tests fail to reveal any organic cause, Carlson speculates that mass hysteria is keeping his neighbors from getting any rest. The outbreak turns fatal and, after days of sleep deprivation among the islanders, panic rises, forcing the doctor to take desperate measures. Anthropomorphized inanimate objects (“the moonlit sea pauses and sighs and lifts itself, before falling back, and lifting again”) add to the feeling of paranormal menace. Horror fans looking for unconventional scares will be grateful." —Publishers Weekly

"5 Stars: Be prepared for sleepless nights, because once you start this multi-layered psychological thriller, you’ll find it impossible to put down . . . and when you’ve finished, you won’t be able to stop thinking about it!" —Linda Hepworth, NB Magazine

"A smart literary thriller, Deprivation kept me guessing to the end." —Keith Rosson, award-winning author of Smoke City and The Mercy of the Tide

"Set in a sleep-starved beach town, Deprivation is a stark psycho-thriller told in prose that’s at once elegant, lucid, and more than a little hypnotic. With deft pacing, hip atmospherics, and above all, his brilliant style, Roy Freirich evokes the sensory distortions that come in transit between wakefulness and dreams. Truly, Deprivation is a rare piece of work, a thriller that succeeds as both art and entertainment." —Kurt Baumeister, author of Pax Americana

"A beautifully crafted trap. At first, the reader imagines that it will be one of those classic horror-thriller books, as all the ingredients are there—a vacation island, likable but life-scarred characters, strange events leading to random violence and satisfying gore. And yes, you can absolutely read Deprivation as a great beach novel, along with the latest Stephen King, Peter Straub or Dean Koontz. But it conveys a much deeper and disturbing reflection on humanity, not far from Albert Camus’s The Plague, José Saramago’s Blindness or Josh Malerman’s Birdbox. Beyond the mystery lies the question on mass hysteria, modern technology and the slowly dissolving of empathy in our society. Extremely well written, with precise and convincing descriptions, realistic characters and deep-reaching plot, Deprivation is a must-read." —Seb Doubinsky, award-winning author of The City-States Cycle series

"A twisty psychological thriller that reminds us that the greatest monsters are to be found within." —Tom Epperson, author of Roberto to the Dark Tower Came and The Kind One

"Freirich delivers thrills and suspense in some of the sharpest writing of any American author working today. The language is so precise, the details and disparate collection of vacation islanders so acutely observed, that when the seemingly impossible happens—no one on the island can sleep—you never doubt for an instant that the living nightmare that follows is terrifyingly real. Insomniacs be warned: this page-turner guarantees a very late night." —David Angsten, author of The Night-Sea Trilogy

"Extremely well written, with precise and convincing descriptions, realistic characters and a deep-reaching plot. Deprivation is a must-read." —BigIndieBooks.com

"Deprivation deals brilliantly with the topic of fear and mass psychology. It also shows how we are all interconnected and how much we influence each other with our words, actions, and gestures. So let them be kind with no exception." —Reading Tonic

"Rich, deep action in a dry summer setting, this book is not your average thriller. Can a dreamless night bring you awake? This book will answer that question and many more. Not only is Freirich’s writing style unique and mysterious, it brings a great purpose to the plot." —Michelle Meng's Book Blog

"Such a great premise: a whole island of sleep deprived characters and a mysterious lost child. Roy Freirich took the story beyond a clever idea and really explored human nature and crowd mentality. It is beautifully written in a visual style and I highly recommend it." —Debra Gillis Book Blog

"As one would expect with horror, violence and gore were present, but the story was about so much more. There were some underlying messages about society I found profound. I enjoyed the characters and the writing. I’m glad I stretched my genres a bit by picking this one up." —Tar Heel Reader

"An island full of vacationers all the sudden cant go to sleep... for days! Sleep deprivation makes people crazy and this book is a thriller. Really enjoyed it. Can't wait for more work from Freirich." —Books Beans & No Booze

"What really stands out in Deprivation, is how well done the decent into madness that the inhabitants of Carratuck Island experience … Freirich has created a fine example of well written prose … that has a cinematic feel to it. It is fast paced and engaging, and is populated with a plethora of well-developed characters. Do yourself a favour and get this book." —Books I Like Book Blog