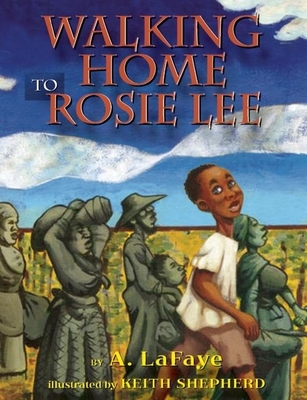 Young Gabe's is a story of heartache and jubilation. He's a child slave freed after the Civil War. He sets off to reunite himself with his mother who was sold before the war's end. Come morning, the folks take to the road again, singing songs, telling stories, and dream-talking of the lives they're gonna live in freedom. And I follow, keeping my eyes open for my mama. Days pass into weeks, and one gray evening as Mr. Dark laid down his coat, I see a woman with a yellow scarf 'round her neck as bright as a star. I run up to grab her hand, saying, Mama? Gabe's odyssey in search of his mother has an epic American quality, and Keith Shepherd's illustrations--influenced deeply by the narrative work of Thomas Hart Benton--fervently portray the struggle in Gabe's heroic quest.

Selected as a 2012 Skipping Stones Honor Book and for the 2012 IRA Teacher's Choices Reading List.

A. LaFaye hopes Walking Home to Rosie Lee will honor all those African American families who struggled to reunite at the end of the Civil War and will pay her respects to those who banded together through the long struggle for freedom. She is the author of the Scott O'Dell Award-winning novel Worth and lives in Tennessee with her daughter Adia.

Keith Shepherd is a painter, graphic designer, and educator working out of Kansas City, MO. His painting Sunday Best is part of the Negro Leagues Baseball Museum's permanent collection. He describes his work as being motivated by family, religion, history, and music.

A. LaFaye hopes Walking Home to Rosie Lee will honor all those African‐American families who struggled to reunite at the end of the Civil War and will pay her respects to those who banded together through the long struggle for freedom. She is the author of the Scott O'Dell Award winning novel Worth and lives in Tennessee with her daughter.

"Set at the end of the Civil War, this account of a freed slave boy’s search for his mother is distinguished by a vivid narrative voice and page-turning suspense."Publishers Weekly

"Applying paint in thickly brushed impasto, Shepherd views Gabe’s world and encounters from a child’s-eye height but gives the barefoot, raggedly clad boy a look of hard-won maturity that points to past sorrows and underscores the depth of his determination. His distinct voice will draw readers into caring about his quest and sharing the tide of joy that accompanies his ultimate success: 'That night, I slept snuggled up tight with my mama, praying for all those boys like me searching for their mamas who be searching for them.' A deeply felt narrative."Kirkus Reviews

"One of the few titles to describe the cruel breakup of family under slavery from a small child’s viewpoint, this honest story also makes clear the anguish of the many loved ones who were lost and never found."Booklist

"A. LaFaye tells the story in an authentic southern voice, with an emotional arc that tugs at the heart. Newcomer Keith D. Shepherd’s rich acrylic paintings bring the story to life. A truly wonderful pairing of words and pictures."The Brown Book Shelf

"A read aloud that feels as if Gabe were sittin' on a porch telling how he found his mama. The story is strengthened by Shepherd's illustrations…Many classroom units will be well-served by this book. Parents and children will cry and cheer together." —Children's Literature

"What a treat! LaFaye has applied her considerable literary gifts to tell a post-Civil War story we rarely, if ever, hear, and has done so in a style as musical as any poem I've ever read. The voices truly sing. Brava!"Nikki Grimes, author of What is Goodbye?

"A well-told story related by Alexandria LaFaye and enhanced by the wonderful full-page illustrations of Keith D. Shepherd. Their talents are combined to celebrate the search of 'strength, love, and determination' represented by Gabe’s quest."Civil War News

"Walking Home to Rosie Lee is written in a naturally cadenced, musical prose style that is both spiritual, Black, and authentic in its sound. Magnificent color illustrations display the vast array of faces and places encountered by young Gabe on his quest to find his mother.Must read literature."Midwest Book Review