Ancient Japan: A Captivating Guide to the Ancient History of Japan, Their Ancient Civilization, and Japanese Culture, Including Stori (Paperback) 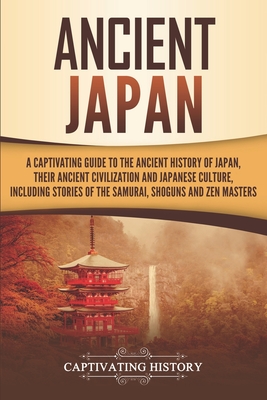 Ancient Japan: A Captivating Guide to the Ancient History of Japan, Their Ancient Civilization, and Japanese Culture, Including Stori (Paperback)


Usually Ships in 1-5 Days
If you want to discover the captivating history of ancient Japan, then keep reading... Japan, the country of the rising sun, is today known as one of the most prosperous and technologically advanced nations despite not having many natural resources. It is full of hardworking, ethical people that live with a mix of old-time traditions and new-age progressive lifestyles. It's the land of famed and virtuous samurai warriors, for whom loyalty is everything, and of legendary and adept ninja assassins, capable of bypassing any obstacle. No less famed is Japanese art, unique in its style and form, from short haiku songs to breathtaking watercolor paintings, both amazingly vivid and simplistic in form. It's the country of Buddhist Zen masters, who were wise and spiritual, symbols of moderation and morality. At the same time, it's the culture of geishas, who represented indulgence, entertainment, and corporeal desires. Today, it is one of the most liberal and democratic countries, yet it still has an emperor on the throne and a long tradition of shōguns, who were more or less military dictators. All in all, Japan seems to be a country of paradoxes and oppositions, of yin and yang. Yet it doesn't seem to suffer from it; instead, it is thriving, growing, and developing, and it has been doing so for a long time. From those contradictions, a sense of unity and pride arose, guiding Japanese history and civilizational development through the ages, leaving an unquestionable mark on the world heritage and mankind. But this is only the surface of an astonishing culture that deserves a deeper look. This guide will lead you into that dive, showing how those characteristics synonymous with the Japanese civilization gradually appeared, formed, and transformed through time. Learning about Japan's history, its past failures and successes and how they shaped their nation, will also illuminate how this civilization developed, while at the same time presenting a full array of interesting stories, persons, and events. In Ancient Japan: A Captivating Guide to the Ancient History of Japan, Their Ancient Civilization, and Japanese Culture, Including Stories of the Samurai, you will discover topics such as
So if you want to learn more about ancient Japan, scroll up and click the "add to cart" button