Bang!! 2: The Complete History of the Universe (Hardcover) 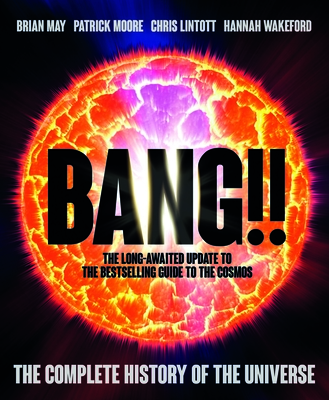 Bang!! 2: The Complete History of the Universe (Hardcover)

In 2004 a rock star, a TV astronomer and a young research astronomer sat down to write the story of the Universe in the order in which it happened, from its birth at the Big Bang 13.7 billion years ago, through to its ultimate demise in the infinitely far future.

The aim of this book is to explain the Big Bang and everything that followed in a way that made sense, in the strict order in which events occurred, and without using maths, so it would be understandable to everyone, regardless of educational background. The original edition of Bang was a bestseller, and a go-to for anyone wanting to understand the story of the origins and evolution of our Universe that did not duck the science.

Since the first edition, thousands of planets have been discovered, the 'habitable zone' has expanded and a flotilla of new satellites has explored our own solar system, bringing back fresh images and new science. In this book all the latest findings about the evolution of stars and galaxies are included, and the current thinking about our ultimate origins. The latest ideas about Dark Matter and Dark Energy are explained, all illustrated with new images from the world's largest telescopes and space missions.

This is the new, updated, popular guide to 'Life, the Universe, and Everything' - The Complete History of the Universe.