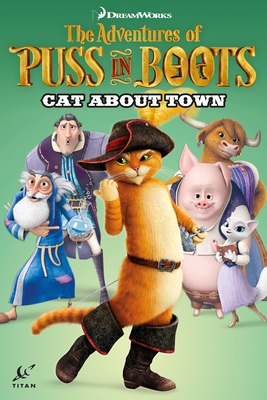 More action, adventure and comedy from Puss in Boots as this time, the swashbuckler is put to sea, and put to work!

Four thrilling adventures starring everyone's favourite swashbuckling cat!
In 'Puss and the Shoemaker', a mysterious peddler comes to town with his amazing array of shoes...and then the shoes start to affect the towns-people... Can Puss resist?
In 'Purr-chance to Dream', Artephius creates a new potion that can make Puss more vigilant for his crime-fighting activities... But how will 24-hour crime-fighting affect Puss...?
Plus two special bonus stories: 'As the Saying Goes' and 'Hall of Mirrors'.
Chris Cooper
Has written for Doctor Who Adventures and creates the Star Trek strip in the official magazine

Egle Bartolini
Is a comic book artist who has drawn for Dreamworks-Titan comics.
Dave Alvarez
Has drawn for Looney Tunes comics.