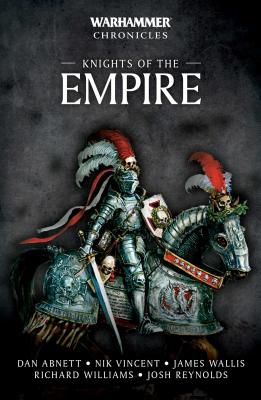 By Dan Abnett
Email or call for price
Unavailable

From the savage, hammer-wielding White Wolves of Middenheim to the disciplined and loyal Reiksguard and fiercely religious Knights of the Blazing Sun, thrill to classic stories about the templars of the Empire


With their shining armour, mighty steeds and religious fervour, knights are the very embodiment of warfare in the Old World. Yet no two orders of these holy warriors are the same – the savage, hammer-wielding White Wolves of Middenheim could not be more different from the disciplined and loyal Reiksguard, whose duty it is to protect the Emperor himself. In contrast, the Knights of the Blazing Sun are dedicated to the Tilean warrior-goddess Myrmidia, and their goal is to achieve perfection in the art of war through battle.

Dan Abnett has written over fifty novels, including the acclaimed Gaunt’s Ghosts series, and the Eisenhorn and Ravenor books. He is the author of the Horus Heresy novels Horus Rising, Legion, The Unremembered Empire, Know No Fear and Prospero Burns, the last two of which were both New York Times bestsellers. He also scripted Macragge’s Honour, the first Horus Heresy graphic novel, as well as numerous audio dramas and short stories set in the Warhammer 40,000 and Warhammer universes. He lives and works in Maidstone, Kent.