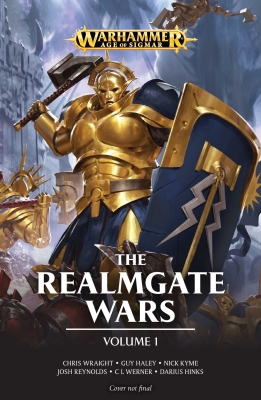 By Various
Email or call for price
Unavailable

Huge omnibus tracking the course of the Realmgate Wars, the epic conflict that defined Games Workshop's newest fantasy setting: the Age of Sigmar.

For five centuries, Chaos has tormented the Mortal Realms. Ancient portals known as realmgates stand defiled by the armies of the Dark Gods, preventing the forces of order from moving freely between the realms. The lands are broken, their populations enslaved, hunted for sport or infected with unholy plague. All hope of salvation was thought lost – until now. For Sigmar has been watching and making ready, and those destined to suffer his retribution will finally know the might of the God-King’s wrath as he unleashes his greatest weapon: the Stormcast Eternals. Reborn heroes clad in god-forged armour, Sigmar's golden warriors descend to liberate the realms from the yoke of Chaos. The Realmgate Wars have begun... This mighty omnibus contains stories by some of Black Library’s finest fantasy authors, including Chris Wraight, Guy Haley, Nick Kyme, Josh Reynolds, C L Werner and Darius Hinks, winner of the David Gemmell Morningstar Award.

Robbie MacNiven is a Highlands-born History graduate from the University of Edinburgh. He has written the Warhammer Age of Sigmar novel Scourge of Fate and Gotrek Gurnisson novella The Bone Desert, as well as the Warhammer 40,000 novels Blood of Iax, The Last Hunt, Carcharodons: Red Tithe, Carcharodons: Outer Dark and Legacy of Russ. His short stories include ‘Redblade’, ‘A Song for the Lost’ and ‘Blood and Iron’. His hobbies include re-enacting, football and obsessing over Warhammer 40,000.

Nick Horth is the author of the novels City of Secrets and Callis and Toll: The Silver Shard, the novella Heart of Winter, as well as several short stories for Age of Sigmar. Nick works as a background writer for Games Workshop, crafting the worlds of Warhammer Age of Sigmar and Warhammer 40,000. He lives in Nottingham, UK.
Evan Dicken's first story for Black Library was ‘The Path to Glory’, and he has since penned several more tales set in the Age of Sigmar, including the novella The Red Hours, and short fiction for the anthologies Gods & Mortals and Myths & Revenants. He has been an avid reader of Black Library novels since he found dog-eared copies of Trollslayer, Xenos and First and Only nestled in the “Used Fantasy/Sci-fi” rack of his local gaming store. He still considers himself an avid hobbyist, although the unpainted Chaos Warband languishing in his basement would beg to differ. By day, he studies old Japanese maps and crunches data at The Ohio State University.

Darius Hinks’ first novel, Warrior Priest, won the David Gemmell Morningstar Award for best newcomer. Since then he has carved a bloody swathe through the Warhammer world with Island of Blood, Sigvald, Razumov’s Tomb and the Orion trilogy. He recently made his first foray into the Age of Sigmar with the novella Warqueen, and his Gotrek Gurnisson novel Ghoulslayer is due for release in the Autumn. He is also the author of the Warhammer 40,000 novels Blackstone Fortress, Mephiston: Blood of Sanguinius, Mephiston: Revenant Crusade and the Space Marine Battles novella Sanctus.