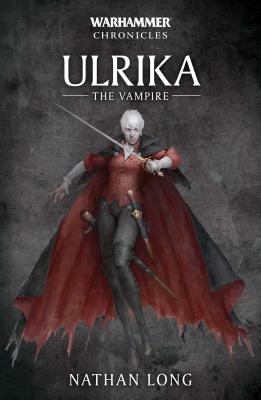 By Nathan Long
Email or call for price
Backordered

This is book number 7 in the Warhammer Chronicles series.

All three of Nathan Long's engaging Ulrika the Vampire novels collected together in an omnibus format for the very first time.

Forced to join the ranks of the undead against her will after being kidnapped by the vampire Adolphus Krieger, fierce Kislevan noblewoman Ulrika Magdova can no longer return to her mortal life, and is forced to seek new allies and purpose. Crossing into the Empire, she is given sanctuary in the city of Nuln by a coven of vampires and taught how to control her powers. However, her headstrong nature soon drives her into fresh danger... Read the tale of Ulrika’s adventures as she travels the darkest corners of the Old World fighting enemies old and new, all while struggling with the demons of her own vampiric existence. This omnibus edition contains the complete Ulrika the Vampire trilogy, comprising the novels Bloodborn, Bloodforged and Bloodsworn.

Nathan Long hails from Los Angeles, California, where he began his career as a screenwriter in Hollywood. He has written a wide selection of Warhammer fantasy novels, including the Blackhearts trilogy and the adventures of Ulrika the vampire. To many fans, he is best known for his work on the hugely successful Gotrek & Felix series, including five full-length novels and the first Black Library fantasy audio drama, Slayer of the Storm God.