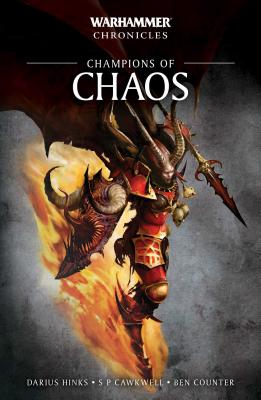 In the cold wastes of the North, the followers of Chaos gather in their thousands, eager to lay waste to the soft lands of the south. These bloodthirsty, undisciplined warriors can only be controlled by the fiercest of leaders – champions who have risen through the ranks by dint of their infamous deeds to become the favoured of the Dark Gods. This omnibus collects together the stories of three such mighty leaders – Prince Sigvald the Magnificent, the Gorequeen of Khorne Valkia the Bloody, and the rogue wizard Egrimm van Horstmann. And be warned: though the journey to greatness is long and hard, the battle to maintain such a position of power amid the servants of Chaos is never-ending... This omnibus contains the novels Valkia the Bloody by Sarah Cawkwell, Sigvald by Darius Hinks and Van Horstmann by Ben Counter, along with additional bonus short stories.

S. P. Cawkwell is a freelance writer based in north-east England. Her work for Black Library includes the Warhammer 40,000 novels The Gildar Rift and Portents, which both feature the Silver Skulls Space Marine Chapter, along with the novella Accursed Eternity¸ which is collected in the Space Marine Battles anthology Architect of Fate . For Warhammer, she is best known for her short stories and novel featuring the feared daemon princess of Khorne, Valkia the Bloody.

Ben Counter is one of Black Library’s most popular Warhammer 40,000 authors. He has two Horus Heresy novels to his name – Galaxy in Flames and Battle for the Abyss  – and is also the author of the six novels in the Soul Drinkers series. For Space Marine Battles, he has written the novels The World Engine and Malodrax, along with novellas collected in the anthologies Architect of Fate, Sanctus Reach, and Damocles. For Warhammer, he wrote the fantasy novel Van Horstmann, featuring the infamous Chaos sorcerer. He is a fanatical painter of miniatures, a pursuit which has won him his most prized possession: a prestigious Golden Demon award. He lives in Portsmouth, England.

Darius Hinks’ first novel, Warrior Priest, won the David Gemmell Morningstar award for best newcomer. Since then he has carved a bloody swathe through the Warhammer Old World in works such as Island of Blood, Sigvald, Razumov’s Tomb, and the Orion trilogy of wood elf novels. He has also ventured into the Warhammer 40,000 universe with the Blood Angels novel Mephiston: Blood of Sanguinius and the Space Marine Battles novella Sanctus.