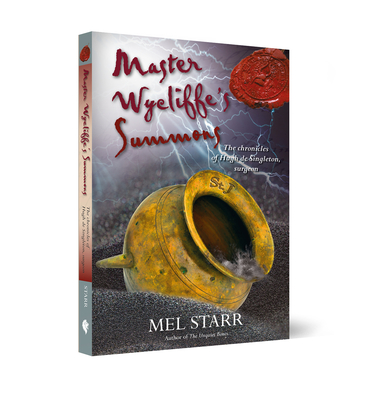 One of Master John Wycliffe's scholars is found dead after a thunderstorm. Was he struck by lightning, or was there something more sinister to his death?

Scholar Richard Sabyn, a particularly obnoxious fellow, was believed to have been struck by lightning. However, Master Wycliffe believes otherwise and calls upon Sir Hugh de Singleton for help. Sir Hugh shares Wycliffe's suspicions and launches a private investigation, learning that it might indeed be possible to make it look as though a man has died from a lightning strike. But who would go to all that effort, and why?

When fellow scholar Simon Duby dies, it raises even more questions and suspicions. What is the connection between the two men? Sir Hugh believes a bronze pot, a bucket of urine, and a small quantity of charcoal and brimstone may hold the answer. During a bleak 1375, can he survive the insidious plague and several attempts on his life as he continues his quest for truth?

Mel Starr ========= Mel Starr is the author of the successful Chronicles of Hugh de Singleton series. He was born and grew up in Kalamazoo, Michigan. After graduating with a MA in history from Western Michigan University in 1970, he taught history in Michigan public schools for thirty-nine years. Since retiring, he has focused on writing full time. Mel and his wife, Susan, have two daughters and eight grandchildren.