Down For the Count: The Stockholm Trilogy: Volume Two (Pushkin Vertigo #15) (Paperback) 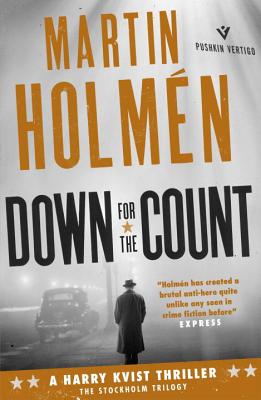 By Martin Holmén, Henning Koch (Translated by)
$14.95
On Our Shelves Now

This is book number 15 in the Pushkin Vertigo series.

November, 1935. Harry Kvist walks out the gates of Langholmen jail into another biting Stockholm winter. He has nothing to his name but a fiercely burning hope: that he can begin a new life with the lover he met in his cell. That he can leave behind his old existence of gutter brawls, bruised fists and broken bones. That he can finally go straight.

But the city has other ideas. Nazis are spreading their poison on the freezing streets, and one of Kvist’s oldest friends has been murdered. Before he can leave Stockholm’s underworld for good, he must track down the killer. As Kvist uncovers a trail of blood leading to the highest echelons of Swedish society, the former boxer finds himself in a fight to the death with his most dangerous opponent yet.

Born in 1974, Martin Holmén studied history, and now teaches at a Stockholm secondary school. Down for the Count is the second thriller in the Harry Kvist Trilogy, following on from Clinch. The trilogy will be completed with Slugger published by Pushkin Vertigo in 2018.

"Well-crafted noir that doesn’t pull its punches, hitting you in the guts with stark surprises." — Thriller Books Journal

"The plot is excellent, the filth and every punch palpable." — Strange Alliances

Praise for The Stockholm Trilogy:

"Ferociously noir... If Chandler and Hammett had truly walked on the wild side, it would read like this." — Val McDermid

"Atmospheric Scandi retro, but Chandleresque to its core." - The Sunday Times Crime Club

"Clinch is a gritty, stylish debut from a Swedish history teacher and in Kvist he has created a brutal anti-hero quite unlike any seen in crime fiction before." - Express

"A fabulously classy twist on pulp fiction: it'll be a top-notch summer book for readers looking for something diverting but smart." - Elle Thinks