Working for the Man, Playing in the Band: My Years with James Brown (Hardcover) 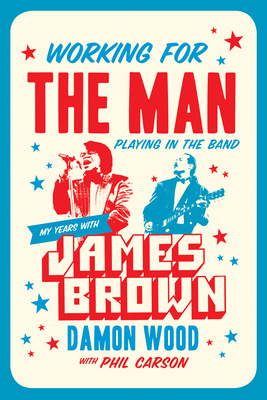 Working for the Man, Playing in the Band: My Years with James Brown (Hardcover)

By Damon Wood, Phil Carson (With)


Usually Ships in 1-5 Days
A young, long-haired rock guitarist finds the funk on stage with the Godfather of Soul In this unvarnished account of toiling under one of popular music's most notorious bosses, Damon Wood details his six years spent playing guitar for James Brown's Soul Generals. In a memoir certain to fascinate Mr. Dynamite's millions of fans, as well as musicians and industry insiders, Wood recalls how a chance encounter with James Brown led him to embrace soul and funk music under the tutelage of its greatest progenitor. Numerous interviews with bandmates provide multiple perspectives on James Brown's complex character, his leadership of his band, the nature of soul and funk, and insights and sometimes harsh lessons learned along the way. This is a sideman's story of the gritty reality of working close to the spotlight but rarely in it. Damon Wood describes life on the road -- often on James Brown's infamous tour bus -- with one guitar, a change of clothes, and two dozen comrades-in-arms as they brought the funk to clubs, theaters, and the biggest music festivals on earth. Working for James Brown could be fear-inducing, inspiring, exhilarating, and exasperating -- all in the space of a single performance.
Damon Wood played guitar for the Soul Generals from 1998 to 2006, shortly before James Brown's passing. Wood has led his band, Harmonious Junk, since 2001, performing and recording original music to glowing reviews. He lives in Denver. Phil Carson is a Denver-based journalist. He is the author of Roy Buchanan: American Axe.