Secret Life of Stars: Astrophysics for Everyone (Hardcover) 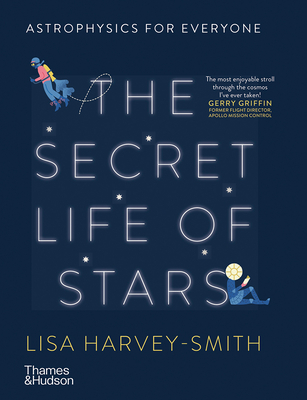 Secret Life of Stars: Astrophysics for Everyone (Hardcover)

In The Secret Life of Stars, award-winning astronomer Lisa Harvey-Smith takes us on a cosmic journey to meet some of the weirdest, most extreme, and enigmatic stars in the universe.

We all know the Sun, the powerhouse of our solar system, but what about Luyten’s Flare, the Rosino-Zwicky Object, or Chanal’s variable star? For those whose curiosity takes them far beyond Earth’s atmosphere, The Secret Life of Stars offers a personal and readily understood introduction to some of the Galaxy’s most remarkable stars.

Written by award-winning astronomer Lisa Harvey-Smith, each chapter explains various different and unusual stars and their amazing characteristics and attributes, from pulsars, blue stragglers, and white dwarfs, to cannibal stars and explosive supernovae. With beautiful chapter illustrations by Eirian Chapman, this book brings to life the remarkable personalities of these stars, reminding readers what a diverse and unpredictable universe we live in and how fortunate we are to live around a stable star, our Sun.

Lisa Harvey-Smith is an award-winning astronomer and professor at the University of New South Wales. In 2018, she was appointed the Australian government’s ambassador for women in science, technology, engineering, and mathematics (STEM). She is the author of When Galaxies Collide and the best-selling children’s book Under the Stars. Harvey-Smith has appeared in several TV series and documentaries as a guest scientist and is a host alongside Professor Brian Cox on ABC TV’s Stargazing Live.
A sparkling work of narrative nonfiction... Dr. Harvey-Smith casts deep-space phenomena such as stars, magnetic fields and nebulae not as remote and impersonal entities but as 'temperamental personalities' with human-like quirks, frailties and emotional relationships... Having hard science presented in the form of lively character sketches is a godsend for those who may find the details of conventional nonfiction hard to retain. Readers will finish this narrative feeling both better-informed and in awe of the vast forces at work.