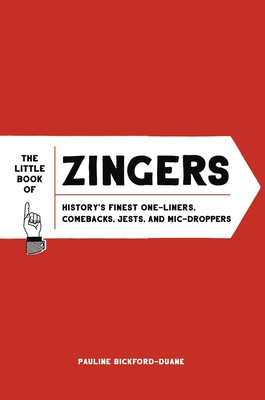 
Email or call for price.
You know Mark Twain, creator of the long-beloved characters Huck Finn and Tom Sawyer, but have you heard what he said about Jane Austen? The Little Book of Zingers will feature the greatest comebacks and one-liners of all time, uttered by the iconic men and women we know and love (or love to hate)!

Every generation sees its fair share of geniuses: men and women who possess boundless intellect and are capable of incredible insight. Søren Kierkegaard was such a man. Widely considered the father of existential philosophy, Kierkegaard uttered such profundities as: “If I am capable of grasping God objectively, I do not believe, but precisely because I cannot do this I must believe.” But on one truly momentous occasion, Kierkegaard made one confident and succinct statement that shook the earth: “My opponent is a glob of snot.” Kierkegaard spoke of Hans Martensen, an academic with whom he’d had a fair share of disagreements. The two often went toe-to-toe in scholarly debate, but with this dynamite zinger, Kierkegaard ended all further discussion. After all, who expects to be called a glob of snot? There’s no coming back from that. The Little Book of Zingers will explore the rich depths of crushingly hilarious salt-in-the-wound one-liners you’ve never heard that’ll make you gasp at their audacity. From the Age of Enlightenment to the Roaring Twenties to the boogie-down seventies, The Little Book of Zingers will take readers on a journey through some of history’s greatest burns, spoken by the men and women who shaped the world.
Pauline Bickford-Duane is a freelance writer and editor who works with a variety of different genres, including fiction, nonfiction, fantasy, humor, and memoir. She grew up in a tiny town in Maine, where she developed a dry wit and a taste for Moxie, and she explored North Carolina and the Mediterranean island of Corsica before returning to her home state to work at the University of Maine library. She currently resides in Florida with her partner and spends most of her time sweating and worrying about being eaten by an alligator.