Shadows of Berlin: A Novel (Paperback) 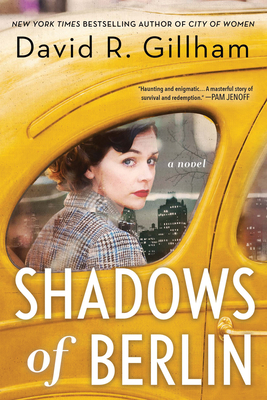 Shadows of Berlin: A Novel (Paperback)

"Reminding us that history is made up of infinite individual choices, Shadows of Berlin is a masterful story of survival and redemption." —Pam Jenoff, New York Times bestselling author of The Woman with the Blue Star

1955 in New York City: the city of instant coffee, bagels at Katz's Deli, ultra-modern TVs. But in the Perlman's walk-up in Chelsea, the past is as close as the present. Rachel came to Manhattan in a wave of displaced Jews who managed to survive the horrors of war. Her Uncle Fritz fleeing with her, Rachel hoped to find freedom from her pain in New York and in the arms of her new American husband, Aaron.

But this child of Berlin and daughter of an artist cannot seem to outrun her guilt in the role of American housewife, not until she can shed the ghosts of her past. And when Uncle Fritz discovers, in a dreary midtown pawn shop, the most shocking portrait that her mother had ever painted, Rachel's memories begin to terrorize her, forcing her to face the choices she made to stay alive?choices that might be her undoing.

From the cafes of war-torn Germany to the frantic drumbeat of 1950's Manhattan, Shadows of Berlin dramatically explores survival, redemption and the way we learn to love and forgive across impossible divides.

"A tribute to resilience and starting over. This is heart-wrenching and memorable." —Publishers Weekly, STARRED review

"A tribute to resilience and starting over. This is heart-wrenching and memorable." — Publishers Weekly

"I have been a fan of David Gilham’s work since City of Women and his latest, Shadows of Berlin, is his best yet. The story of Rachel, a Holocaust survivor, who seeks to start a new life in New York City with her American-born husband, Aaron, but cannot outrun the secrets of her past and what she did to survive, is haunting and enigmatic. Gilham writes about both the war and its aftermath with a sure hand, placing readers in the shoes of his memorable characters and compelling them to ask what they would have done. Reminding us that history is made up of infinite individual choices, Shadows of Berlin is a masterful story of survival and redemption." — Pam Jenoff, New York Times bestselling author of The Woman with the Blue Star

"In a poignant novel saturated in the rich hues of time, place, and art comes the unforgettable story of Rachel Perlman—a child of war, grown in body but held captive in soul by a past of abuse, guilt, and unimaginable trauma. Yet even from the ruinous embers of war, Gillham skillfully, tenderly allows Rachel to rise, revealing the life-affirming truth that we may always begin again, no matter where we are. Though timeless, Shadows of Berlin is a novel for our time because it provides what we desperately need all the time: Hope." — Erika Robuck, national bestselling author of The Invisible Woman

"A powerful, heartrending story of guilt and forgiveness, loss and love, war's long shadow over the living and our memories of the dead. With exquisite poignancy, Gillham asks what it means to survive profound trauma and find hope in a broken world." — Jennifer Rosner, author of The Yellow Bird Sings

"David Gillham has written a deeply moving story about an aspect of the Holocaust that few people know about - how thousands of survivors came to New York City to restart their lives and escape demons from the past. But some have a hard time dealing with the guilt, shame, and anger caused by the terrible experience. Gillham paints a vivid picture of their life in post-war New York while imaginatively linking it to their ordeal in wartime Berlin." — Charles Belfoure, New York Times bestselling author of The Paris Architect

"Straddling the ragged line between guilt and tender mercy, Shadows of Berlin is Gillham at his best, writing compelling, evocative history. He is a master wordsmith who deftly pulls us down winding corridors riddled with broken spirits and haunting ghosts on a quest for absolution. An unspeakable past unspools in spits and sputters. Gillham nimbly sews the scraps together. The result is a riveting story that is unputdownable." — Leah Weiss, bestselling author of If the Creek Don’t Rise and All the Little Hopes

"Colorful dialogue, meticulously researched period detail, and an intricate plot about war and penance combine in a richly layered tale of a New York housewife with a secret past buried in World War II Berlin. Immersive and evocative, this tangled tale of regret and rebirth will haunt you." — Kristen Harmel, New York Times bestselling author