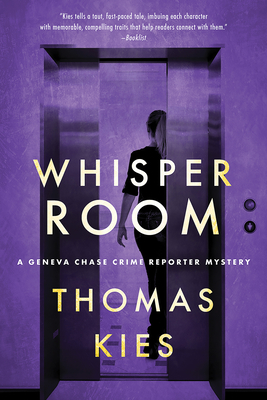 "Kies's sequel to the Sue Grafton Award nominee Shadow Hill is a compelling story for readers who want to follow investigative reporters into the crime scenes."— Library Journal

Geneva encounters a deceptive cast of suspects who pull her into a high-speed chase into the Whisper Room, a dating app for only the most elite members of society—where affairs, blackmail, and murder are all on the menu.

When wealthy men crave no-strings attached encounters, the Whisper Room promises to deliver. Escorts are turning up dead, and Geneva Chase is ready to dive into the exclusive dating ring and catch the killer.

But then one of The Whisper Room's escorts turns up murdered—and she looks a lot like the blond in the blackmail video. The more Genie digs, the more blackmail victims and potential suspects she finds—and the more people she angers. Dangerous people, with links to organized crime and human trafficking. Will this story of a lifetime put a premature end to her own?

Author of the Geneva Chase Mystery Series, Thomas Kies lives and writes on a barrier island on the coast of North Carolina with his wife, Cindy, and Lilly, their shih-tzu. He has had a long career working for newspapers and magazines, primarily in New England and New York, and is currently working on his next novel, Graveyard Bay.

"Readers will hope to see a lot more of the down-to-earth Geneva...Sara Paretsky fans will find much to like." — Publishers Weekly

Kies's sequel to the Sue Grafton Award nominee Shadow Hill is a compelling story for readers who want to follow investigative reporters into the crime scenes.