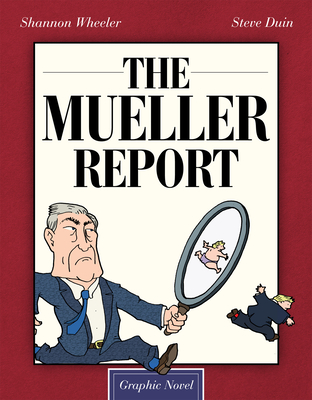 
On Our Shelves Now
It's the greatest WHODUNIT of our time... or a new low for "Presidential Harassment!"

Shannon Wheeler, Eisner Award-winning New Yorker cartoonist (Too Much Coffee Man, Sh*t My President Says, God is Disappointed in You), and veteran journalist Steve Duin (The Oregonian, Comics: Between the Panels, Oil and Water) turn their critical eye on the Mueller Report--a comprehensive, understandable, and readable graphic novel version of the book every patriot needs.

Fight the spin spewing forth from both parties and political pulpits and check out this graphic novel that brings a 400-page legal document down to size. Wheeler and Duin, in graphic form, bring to life scenes detailed in the report: from the infamous Trump Tower Meeting of 2016 to Trump exclaiming "I'm f*cked" upon finding out he was the subject of investigation. It's in the report and it's in the graphic novel!

See Trump berate his Attorney General. Watch a petulant Commander-in-Chief lob insults at the White House counsel. Witness the "witch hunt" as it happened, cataloged as only the top lawman in the country could!

This staggering laundry list of questionable contacts, misleading statements, unreported engagements, and possible coordination--enough to stun any student of the U.S. Constitution--is laid bare with a cold, satirical edge.

You'll laugh. You'll cry. You may Tweet in anger. But most importantly, you will be reading the report for yourself!
Shannon Wheeler won awards and contributes to various publications. He created Too Much Coffee Man. His website is tmcm.com. He embarrasses himself on Twitter as @MuchCoffee. Sh*t My President Says is his recent book of illustrated Trump tweets. His previous book, God Is Disappointed with You (with Mark Russell) is available anywhere religious-humor books are sold.

Steve Duin is The Oregonian's Metro columnist. He is the author/co-author of six books, including Comics: Between the Panels, a history of comics; Father Time, a collection of his columns on family and fatherhood; and a graphic novel, Oil and Water. His last name, for inexplicable reasons, is pronounced "Dean."

"The content of The Mueller Report is essential reading, and Wheeler and Duin’s take is seamless." —The Beat