A Tale of Two Cats (Hardcover) 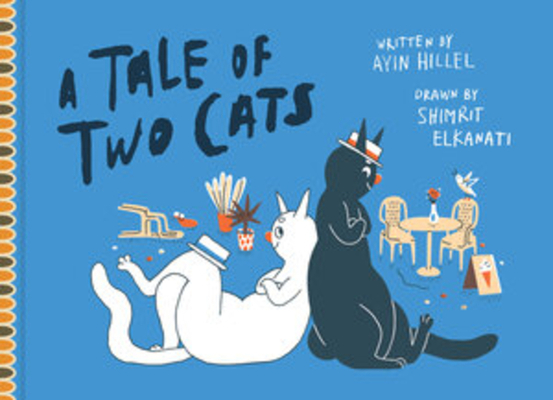 A Tale of Two Cats (Hardcover)

Once upon a time, there were two cats: one black, one white, who were always squabbling over which one was prettier. One day, their curiosity gets the better of them and they jump into buckets of paint to change color. After some playful chaos, they soon learn their lesson and rekindle their friendship. Writer Ayin Hillel’s bouncy rhymes and artist Shimrit Elkanati’s charming drawings combine into a work of comics in a children’s book format.

Ayin Hillel was born in 1926 in the Jezreel Valley of Israel. He fought in the elite Palmach during Israel’s 1948 War of Independence and worked as Jerusalem’s chief landscape architect from 1954-1969, designing the city’s botanical and biblical gardens. A poet and beloved children’s book author, Hillel’s published works span forty years. He was awarded the Fichman Prize and an Andersen Honor Citation in 1976. He died in 1990.

Shimrit Elkanati is a cartoonist and children's book illustrator whose work has been featured in The New York Times, Nobrow, and Scrawl. She is the recipient of a 2014 Honorable Mention from the Israel Museum's Ben-Yitzhak Award for the Illustration of Children's Books.
Elkanati’s delicate line drawings create a festive backdrop for this amusing, fable-like tale of a disagreement between two vain cats.
— Publishers Weekly