Say Something Back & Time Lived, Without Its Flow (Paperback) 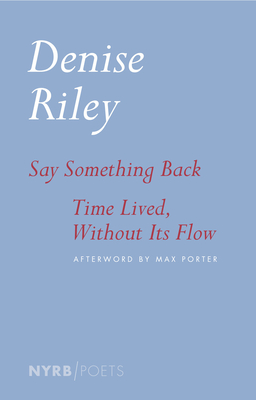 Say Something Back & Time Lived, Without Its Flow (Paperback)


On Our Shelves Now
A moving meditation on grief and motherhood by one of Britain's most celebrated poets.

The British poet Denise Riley is one of the finest and most individual writers at work in English today. With her striking musical gifts, she is as happy in traditional forms as experimental, and though her poetry has a kinship to that of the New York School, at heart she is unaligned with any tribe. A distinguished philosopher and feminist theorist as well as a poet, Riley has produced a body of work that is both intellectually uncompromising and emotionally open. This book, her first collection of poems to appear with an American press, includes Riley’s widely acclaimed recent volume Say Something Back, a lyric meditation on bereavement composed, as she has written, “in imagined solidarity with the endless others whose adult children have died, often in far worse circumstances.” Riley’s new prose work, Time Lived, Without Its Flow, returns to the subject of grief, just as grief returns in memory to be continually relived.
Denise Riley’s nonfiction includes War in the Nursery: Theories of the Child and Mother (1983); “Am I That Name?”: Feminism and the Category of “Women” in History (1988); The Words of Selves: Identification, Solidarity, Irony (2000); The Force of Language (with Jean-Jacques Lecercle; 2004); and Impersonal Passion: Language as Affect (2005). Her poetry collections include Marxism for Infants (1977), Dry Air (1985), Mop Mop Georgette (1993), and, most recently, Selected Poems 1976–2016 (2019).

Max Porter is the author of the novels Lanny and Grief Is the Thing with Feathers.
"[Riley’s] writing is perfectly weighted, justifies its existence. It is impossible not to want to 'say something back' to each of her poems in recognition of their outstanding quality. Her voice is strong and beautiful—an imperative in itself. But her subject is not strength—it is more that she is robust about frailty." —Kate Kellaway, The Observer

“But if, most resonantly of all, you come to poetry to be moved, ‘A Part Song’, the 20-part exequy for the poet’s late son at the heart of [Say Something Back], is an astonishing, wrenching and sustained study of grief. This multifaceted piece is both a poem and a sequence, since each part stands alone but the whole is more than the sum of its parts. Like all major poetry of grief, it invites us to observe the act of witness, the process of trying to present an account.” —Fiona Sampson, The Guardian

“This book is without a scrap of sentimentality but provokes a deep emotional response: not from poignancy but in awe at the precision with which Riley records her grief. It is often too painful to read, but too valuable not to.” —John Self, The Guardian