The Kindness of Strangers (Paperback) 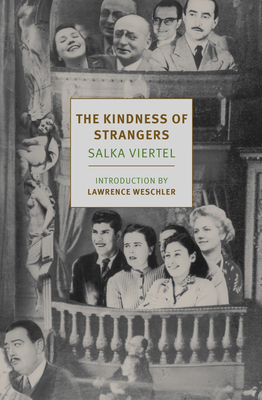 The Kindness of Strangers (Paperback)

By Salka Viertel, Lawrence Weschler (Introduction by), Donna Rifkind (Afterword by)
List Price: $18.95
Our Price: $17.95
(Save: $1.00 5%)
On Our Shelves Now
A memoir about showbiz in the early 20th century that travels from the theaters of Vienna, Prague, and Berlin, to Hollywood during the golden age, complete with encounters with Franz Kafka, Albert Einstein, and Greta Garbo along the way.

Salka Viertel’s autobiography tells of a brilliant, creative, and well-connected woman’s pilgrimage through the darkest years of the twentieth century, a journey that would take her from a remote province of the Austro-Hungarian Empire to Hollywood. The Kindness of Strangers is, to quote the New Yorker writer S. N. Behrman, “a very rich book. It provides a panorama of the dissolving civilizations of the twentieth century. In all of them the author lived at the apex of their culture and artistic aristocracies. Her childhood . . . is an entrancing idyll. In Berlin, in Prague, in Vienna, there appears Karl Kraus, Kafka, Rilke, Robert Musil, Schoenberg, Einstein, Alban Berg. There is the suffering and disruption of the First World War and the suffering and agony after it, which is described with such intimacy and vividness that you endure these terrible years with the author. Then comes the migration to Hollywood, where Salka’s house on Mabery Road becomes a kind of Pantheon for the gathered artists, musicians, and writers. It seems to me that no one has ever described Hollywood and the life of writers there with such verve.”
Salka Viertel (1889-1978) was born Salomea Sara Steuermann in Galicia, then part of the Austro-Hungarian Empire. In the late 1920s, Salka and her husband, Berthold Viertel, left Berlin for Hollywood, where Berthold wrote screenplays and directed films and Salka began acting in motion pictures. There, she befriended Greta Garbo on the set of Anna Christie and co-wrote screenplays for many films. During World War II, the Viertels started a salon in their home for other émigrés. In 1942, Salka was put on an FBI watch list and later her salon was dissolved under the inquisition of the Hollywood film industry. After the war, she returned to Europe where she lived until the end of her life.

Lawrence Weschler, the grandson of the eminent Viennese-born Weimar-era emigre (and Hollywood) composer Ernst Toch, has written several celebrated works of of literary nonfiction, including Vermeer in Bosnia, Mr. Wilson’s Cabinet of Wonder, and Seeing is Forgetting the Name of the Thing of One Sees. He was a staff writer at The New Yorker for over twenty years and is a contributing editor to McSweeney’s, The Threepenny Review, and The Virginia Quarterly Review. The recipient of a Lannan Literary Award and the National Book Critics Circle Award for Criticism, he recently retired as director of the New York Institute for the Humanities at New York University. He is currently completing a biographical memoir of Oliver Sacks.
“Thank goodness Greta Garbo encouraged her confidante Salka Viertel to write. With cameos by Kafka, Sarah Bern­hardt, Eisenstein, Isherwood, and many others, Viertel’s memoir is humane, lightly ironic, and dizzyingly enter­taining. It’s a portrait of two lost worlds—the pre­-Hitler German­-speaking stage and the pre-­CGI Hollywood—as well as the story of an actress and screenwriter who all her life was bold in love and passionate for the arts.” —Caleb Crain

“Salka ends her book with a phrase about her ‘incorrigible heart.’ It is this quality which sustains and ennobles all the artistic, intellectual, social and political events which her book narrates. It gives us a sense of what it is to be a true person. Without that core of warm humanity all the rest would be vanity.” —Harold Clurman, The Nation

“From early childhood in the Polish Ukrainian sector of Austria-Hungary through her experiences in the German theater and Hollywood, Mrs. Viertel shares a full life, candidly and rewardingly.”—Kirkus Reviews


“Salka is forgotten today. Biographies have been written about her ‘genius’ husband Berthold, but Salka appears only as footnote in works about Greta Garbo. She deserves better, and her extraordinary story should to be read today by anyone interested in the German exile experience.”—Dialog International