Lochend--Monster Hunting on the Run (Paperback) 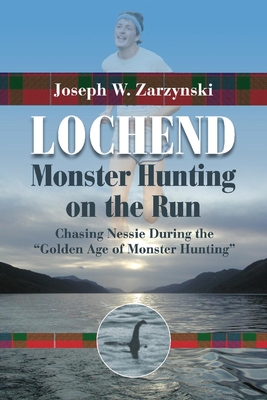 Lochend--Monster Hunting on the Run (Paperback)

Since April 1933, when Aldie and John Mackay, Drumnadrochit, Scotland residents, sighted a strange creature splashing about on the surface of the 22 ½ mile-long Loch Ness, the world has been fascinated that the waterway might be the habitat of a colony of large unidentified animals. Soon afterwards, expeditions were organized to the Scottish Highlands trying to solve the world's most challenging zoological puzzle.

Beginning in the 1960s, more advanced scientific equipment was brought to the deep waterway hoping that state-of-the-art electronics and optics might decipher the scientific mystery. In the 1970s, some of the best scientists in the world traveled to the legendary loch with teams of scuba divers, side scan sonar, customized underwater cameras, and other remote sensing apparatus. In a sense, well-publicized Loch Ness became a testing ground for some of this cutting-edge underwater technology.

The 200-page book, with over 90 photographs and illustrations, likewise tells the story of a little-known athletic accomplishment at Loch Ness. In 1984, Joseph W. Zarzynski, a self-described "average" marathoner and ultramarathoner, completed a 28.5-mile solo run along the loch. He may have been the first person to have run the full length of fabled Loch Ness. The author uses his overland jaunt to tell anecdotes about the heyday of pursuing the elusive Nessie animals.

Included in the book are also stories about other Loch Ness mysteries. These include: an ancient artificial island called a crannog, a hill where local lore has it that a dragon is buried there, possible monster hoaxes perpetrated at the waterway, a reputed 1934 sighting of a Nessie monster crossing a shoreside road, strange stone circles found on the waterway's bottomlands, a full-scale movie monster prop that sank in the loch, a giant fiberglass net sunk in the loch to snare a beastie, and a rare World War II bomber discovered during a Loch Ness monster search. Moreover, Zarzynski provides a primer into other denizens of the deep known by these nicknames—Morag (Loch Morar, Scotland), Seileag (Loch Shiel, Scotland), and Champ (Lake Champlain, New York, Vermont, and Quebec).

In 1985, as a correspondent for GENERAL AVIATION NEWS, Zarzynski reported on the recovery of a sunken World War II British Wellington bomber from Loch Ness. That project inspired him to return to college to become a maritime archaeologist. From 1987–2011, the Endicott, New York native was executive director of Bateaux Below. For a quarter-of-a-century, the not-for-profit team studied Lake George, New York shipwrecks, primarily French & Indian War (1755–1763) vessels. In 1990, Zarzynski directed the group that used a Klein side scan sonar to discover Lake George's 1758 LAND TORTOISE radeau shipwreck, called "North America's Oldest Intact Warship." The British warship, a type of floating gun battery, is a National Historic Landmark, the sixth shipwreck in American waters with that prestigious historic designation.