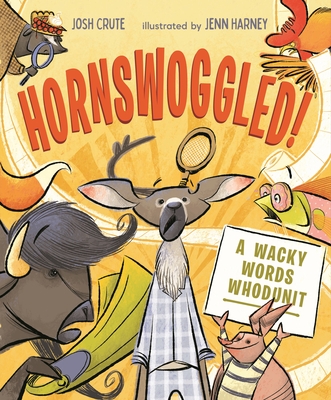 Deer wakes up to find one of his antlers is missing…and there’s a tennis racket in its place? One by one his friends also uncover that their important items from glasses to lucky boots have been swapped with silly, useless replacements like donuts and swim flippers. They’ve been hornswoggled! (Hornswoggled means tricked.) It’s pure poppycock! (Poppycock means nonsense.)

Once they gather together to find out what happened, will they find the true thief or be outfoxed? Laugh along with a hilarious cast of animal characters searching for the mysterious trickster in this humorous whodunit bursting with exciting, wacky words that kids will love.

Jenn Harney is an illustrator and toy designer whose work has been featured in Highlights for Children magazine. Jenn lives in Cleveland, Ohio, with her husband, her daughter, a dog named Steve, and a fish with nine lives. She is the author of the Hazy Bloom series, including Hazy Bloom and The Tomorrow Power and Hazy Bloom and The Pet Project.