Elvis '68 Comeback: The Story Behind the Special (Hardcover) 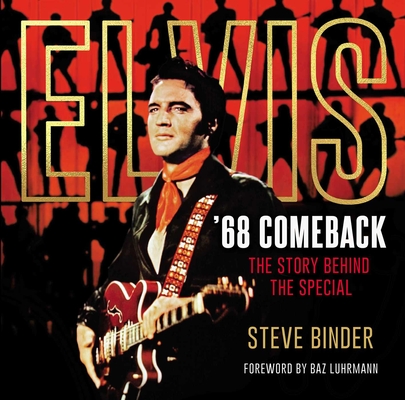 Elvis '68 Comeback: The Story Behind the Special (Hardcover)


On Our Shelves Now
A chronicle of the comeback performance that marked Elvis Presley’s return from the screen to the stage. Includes exclusive content from the show’s director, Steve Binder. The book contains a foreword by noted film director Baz Luhrmann, whose film credits include Strictly Ballroom, William Shakespeare's Romeo + Juliet, Moulin Rouge!, The Great Gatsby, and the 2022 Warner Brothers feature film, Elvis.

Take a tour behind the scenes at the NBC television special that relaunched Elvis Presley’s career as a stage musician. Author Steve Binder—who directed the TV special—provides exclusive content that gives fans even more insight into the performance that many see as a high point in the King of Rock’s reign of American music. Elvis ’68 Comeback includes full-color photographs and detailed commentary on the show’s development and production, making this an excellent addition to the shelf of every Elvis fan. Foreword by film director Baz Luhrmann.
Steve Binder is an Emmy and ACE award-winning producer, director, writer, educator, and Golden Globe nominee. The Los Angeles Times called his first feature film, The T.A.M.I. Show, “the greatest of all rock 'n' roll films.” Steve has written, produced, and directed dozens of television specials, including multiple Diana Ross specials and Petula with British singer Petula Clark and Harry Belafonte. He has frequently been a guest speaker at the William S. Paley Media Center in Los Angeles and in New York, where special evenings were devoted to his work in the entertainment industry.
In 1968, Steve conceived, directed, and produced ELVIS, The ‘68 Comeback Special. TV Guide called this landmark event “the second greatest musical moment in television history next to the Beatles' debut on the Ed Sullivan Show.” Steve also proudly served in the U.S. Army in Europe as an announcer for the Armed Forces Radio network. He is currently an active member of the Directors and Producers Guilds of America and serves as an adjunct professor at the University of Southern California.