Night Sky Explorer: Your Guide to the Heavens (Hardcover) 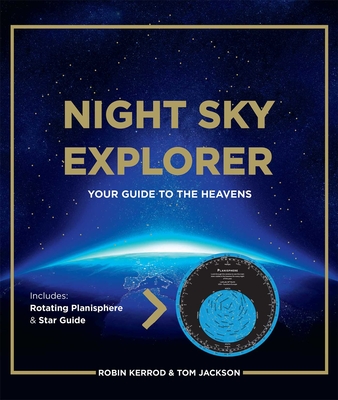 Night Sky Explorer: Your Guide to the Heavens (Hardcover)


Email or call for price.
An indispensable tool for the amateur astronomer.

Night Sky Explorer will help you learn everything a beginning stargazer needs to know. Use the included rotating planisphere to figure out which stars are currently visible, and the 128-page book to learn more about each celestial body. Key facts are presented in an easy-to-understand format, and sidebars offer fun trivia and illuminating anecdotes. Star maps feature the dominant constellations at any given time of the year, so you’ll be prepared for planetary enlightenment when the moon rises!

Robin Kerrod is a writer and editor, specializing in astronomy. His published works include The Sky at Night, The Way the Universe Works, and many of the sky charts used in schools. He is a Fellow of Britain's Royal Astronomical Society and a former winner of the COPUS (Committee on the Public Understanding of Science) Junior Science Book Prize.

Tom Jackson has been a writer for more than 20 years. He has written more than 100 books and contributed to many more, covering everything from axolotls to zoroastrianism. His specialties are natural history, technology and all things scientific. Tom studied zoology at Bristol University and has had spells working in zoos and as a conservationist. He’s mucked out polar bears and fed the penguins, planted trees in Somerset, surveyed Vietnamese jungle and rescued wildlife from drought in Africa. Writing jobs have also taken him to the Galápagos Islands, the Amazon rain forest, the coral reefs of Indonesia and the Sahara Desert. Today, Tom lives in Bristol, England, with his wife and three children, and can be found mostly in the attic.