Echoes of the Fall: An Earl Marcus Mystery (Hardcover) 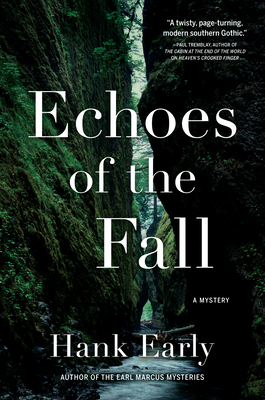 This is book number 3 in the An Earl Marcus Mystery series.

Earl Marcus has faced a litany of demons in his time, but a grisly murder sends him spiraling into a vortex of long-buried secrets.

After losing a hotly contested sheriff's race to the lackey of corrupt politician Jeb Walsh, Earl Marcus has had the worst summer of his life. But worst turns deadly when a body turns up on Earl's front lawn, accompanied by a cryptic letter.

Earl finds a cell phone in the victim's car and tracks it to The Harden School, an old, isolated campus surrounded by barbed wire and locked gates, and catches a sneak peek at a file labeled complaints, where he finds a familiar name: Jeb Walsh. Jeb's ex-wife Eleanor had lodged multiple complaints against the school on behalf of her son, and when he contacts Eleanor, the horrifying truth begins to emerge.

Desperate to make a connection between the school and the dead man, Earl journeys into a world where nothing is sacred.

Hank Early is a middle school teacher and writer located in Central Alabama. He enjoys good beer, strong coffee, and wild storms. He's married and has two kids who are constantly giving him ideas for his next novel. This is his third Earl Marcus mystery.

Praise for Echoes of the Fall:
"Clever...The past hangs heavily...adding depth to a story heavy on psychological introspection...In the end, it's the characters that the reader will remember. Early does a fine job blending crime and the Southern gothic."
—Publishers Weekly

"Characters that the reader will remember. Early does a fine job blending crime and the Southern gothic."
—Publishers Weekly

"With touches of southern gothic...The mood is palpable, but it never gets in the way of the brisk pace in this well-told, irresistible story."
—Booklist

Praise for In the Valley of the Devil:
“Dan Brown’s fans should enjoy the mixing of supernatural and thriller elements here; those who favorsouthern mysteries with gothic elements will be another audience.”
—Booklist

“Early cements his position as one of the most innovative voices inmystery and proves he’s an author who isn’t afraid to tackle important issues without sounding preachyor compromising entertainment.”
—Criminal Element

“A storyline that will make the heart pump faster with its intensity...In the Valley of the Devil will appeal to anyone who likes the hardboiled Southern private eye novel where evil lurksbeneath the surface of a quiet little town.”
—NY Journal of Books

“Hank Early pens rural noir with the best of them, and his protagonist,Earl Marcus, is a worthy addition to the canon of hard-as-bark detectives.”
—Laird Barron, author of Blood Standard