Malefactor (War with No Name #3) (Paperback) 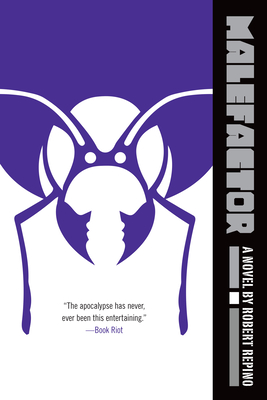 Malefactor (War with No Name #3) (Paperback)

This is book number 3 in the War with No Name series.

Robert Repino concludes the War with No Name series in an explosive final novel.

Over a decade has passed since the ant queen began her apocalyptic war with the humans. In the aftermath, she leaves behind a strange legacy: a race of uplifted animals, the queen’s conscripts in the war effort, now trying to make their way in the world they destroyed. While the conflict has left deep scars, it has also allowed both sides to demonstrate feats of courage and compassion that were never possible before. And now, after years of bloodshed, the survivors have a fleeting chance to build a lasting peace.

But peace always comes with a price. The holy city of Hosanna—where animals and humans form a joint government—finds itself surrounded by wolves who are determined to retake the land. A powerful matriarch has united the rival wolf packs, using a terrible power harnessed from the Queen herself.

Soon, the looming violence pulls in those who sought to escape. The war hero Mort(e) suspects a plot to destroy Hosanna from within, and recruits a team of unlikely allies to investigate. Falkirk, captain of the airship Vesuvius, must choose between treason and loyalty to save the city. And D’Arc, sailing aboard the al-Rihla, learns that the wolves may have triggered a new cycle of life for the Colony, bringing a final reckoning to animal and human alike. Once reunited, the three outcasts begin a journey into wolf territory to face the last remnant of the queen’s empire. But while destiny has drawn them together, it may destroy them as well, for even love, courage, and honor may not be enough to stop the forces of destruction set to be unleashed on the world.
Robert Repino grew up in Drexel Hill, Pennsylvania. After serving in the Peace Corps, he earned an MFA in Creative Writing from Emerson College. His fiction includes short stories in The Literary Review and Hobart, as well as the middle grade series Spark and the League of Ursus. He lives in New York and works as an editor for Oxford University Press. Malefactor concludes the War with No Name series, and follows the novels D'Arc and Mort(e) and the novella Culdesac.
Praise for Malefactor

“This is epic stuff, though it’s presented throughout on a very personal level, with the weird interspecies pairings seeming somehow natural in spite of everything. Odd but effective world building in the grand fantasy manner.”
—The Toronto Star

“A deftly scripted and inherently fascinating dystopian novel . . . [Malefactor] is essentially a romantic fantasy played out against the background of a Post-Apocalyptic world.
—Midwest Book Review

“Repino continues to explore the themes of individual and societal change. Each page is filled with questions of what change looks like in a post-apocalyptic world, how it is unstoppable, and how we do or do not accept it . . . For those who’ve been waiting for this book, the action-packed, trial-ridden ending was worth the wait. Malefactor is a satisfying ending to the saga.”
—Apex Magazine

“Malefactor is exactly the kind of finale any well-done series might hope for. It’s a big, thought-inspiring mental meal and a hair-raising roller coaster. It’s satisfying enough to leave you happy and fulfilled, and good enough to make you wonder and hope what else can happen in this world?”
—Narrative Species

“Malefactor is a riveting tale with a lot of amazing work put into it . . . Highly recommended!”
—Nerd News Social

Praise for the War With No Name series

“Mort(e) catapults the reader into a wild, apocalyptic world . . . A strangely moving story.”
—The Washington Post

“Marvelously droll . . . This novel is all kinds of crazy, but it wears its crazy so well.”
—Slate

“An epic science-fiction thriller . . . Mort(e) will stick with you long after you close the pages.”
—Tor.com

“Read this novel and you will never look at your pet the same way again.”
—Daniel H. Wilson, author of Robopocalypse and Robogenesis

"Repino crafts achingly real characters from housecats and doggies, and gets you sympathizing with both sides of the in-equation. This is a perfect example of the power of pulp, wild adventure for domesticated humans."
—​KQED Arts

"Fantastic . . . Well-drawn characters and emotional heft are hallmarks of this unusual series about the power of myth, love, and redemption in a dangerous time."
—Publishers Weekly, Starred Review