The Forest Brims Over: A Novel (Paperback) 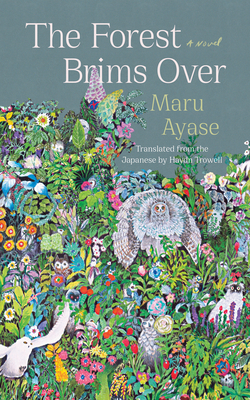 The Forest Brims Over: A Novel (Paperback)

Nowatari Rui has long been the subject of her husband’s novels, depicted as a pure woman who takes great pleasure in sex. With her privacy and identity continually stripped away, she has come to be seen by society first and foremost as the inspiration for her husband’s art. When a decade’s worth of frustrations reaches its boiling point, Rui consumes a bowl of seeds, and buds and roots begin to sprout all over her body. Instead of taking her to a hospital, her husband keeps her in an aquaterrarium, set to compose a new novel based on this unsettling experience. But Rui grows at a rapid pace and soon breaks away from her husband by turning into a forest—and in time, she takes over the entire city.

As fantasy and reality bleed together, The Forest Brims Over challenges unconscious gender biases and explores the boundaries between art and exploitation—muse abuse—in the literary world.
MARU AYASE has published seventeen books, many of which have been finalists for major awards in Japan. The Forest Brims Over is her first title to be translated into English.

HAYDN TROWELL is an Australian literary translator of modern and contemporary Japanese fiction. His translations include Love at Six Thousand Degrees by Maki Kashimada and the forthcoming title The Rainbow by Yasunari Kawabata.
"The Forest Brims Over fascinates with its surrealistic and yet all-too-familiar tale of female agency subsumed under male ambition. Again and again the prose shifts registers and morphs, a feat that Ayase and Trowell pull off beautifully." ––YZ Chin, author of Edge Case