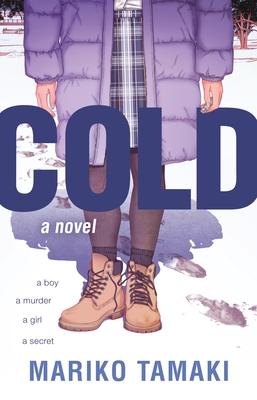 A boy, a murder, a girl, a secret. From award-winning author Mariko Tamaki comes Cold, a haunting YA novel about a shocking crime, told by a boy who died—and a girl who wants to know why.

Who was Todd Mayer, and why don't any of his fellow students at Albright Academy seem to know, or want to say, anything about him?

Todd Mayer is dead. Now a ghost, hovering over his body, recently discovered in a snow covered park, naked and frozen. As detectives investigate Todd's homicide, talking to the very people linked to the events leading to his death, Todd replays the choice that led him to his end.

Georgia didn't know Todd. But ever since she heard about his death, she can’t stop thinking about him. Maybe because they’re both outcasts at their school, or because they’re both queer. Maybe because the story of Todd people keep telling feels like a lot of fake stories Georgia has heard people tell. Plus Georgia has a feeling she’s seen Todd somewhere before, somewhere he wasn’t supposed to be.

Told through the voices of Todd in his afterlife and Georgia as she uncovers the truth behind his death, Cold is an immersive, emotional, and provocative read.

“Cold is an atmospheric, tightly woven murder mystery told with a sharp voice and a complex, layered cast. The kind of story you inhale.” — RANDY RIBAY, AUTHOR OF THE NATIONAL BOOK AWARD FINALIST PATRON SAINTS OF NOTHING

“Mariko Tamaki’s Cold is a sharply written, moody mystery/noir in which even the ghosts have something to hide. Will give you chills.” — LAURA RUBY, TWO-TIME NATIONAL BOOK AWARD FINALIST AND AUTHOR OF THIRTEEN DOORWAYS, WOLVES BEHIND THEM ALL

“Tamaki brilliantly explores the ways we show up for each other and the ways we don’t. A rare, unforgettable mystery about finding the truth inside yourself, despite loss.” — GWENDA BOND, NEW YORK TIMES–BESTSELLING AUTHOR

“In Cold, Mariko Tamaki creates a world of kids crashing into adulthood with writing that is gritty and moving. This is a story where the living sometimes haunt us more than ghosts. Tamaki dazzlingly shows us that the search for love and justice can be more tangled up than we realize.” — EMILY SCHULTZ, AUTHOR OF THE BLONDES AND LITTLE THREATS

Mariko Tamaki is a New York Times bestselling Canadian writer of comics and prose. She is the co-creator of This One Summer, with Jillian Tamaki, and Laura Dean Keeps Breaking Up With Me, with Rosemary Valero-O'Connell, both of which received Eisner Awards and Printz Honors. She also writes superhero stories Marvel and DC Comics. Mariko lives in Oakland.

"Tamaki skillfully weaves issues of power, vulnerability, and sexual orientation into the teen-ghost trope... A tightly constructed page-turner that poses big questions about character, morality, and truth." —The Horn Book

"Sharp and authentic, Cold doesn’t just take its title from the chill of a wintry day but also from the cruelty and isolation of adolescence. Readers who love intense, suspenseful storytelling will devour it in one sitting." —BookPage

"Tamaki is so gifted at creating vulnerable, damaged, and compelling characters." —The Bulletin of the Center for Children's Books (BCCB)

"This is an immersive, suspenseful reading experience... it should spark discussions about peer pressure, bystander syndrome, and what we owe to each other." —Booklist

"[Great for] fans of introspective mysteries such as Malinda Lo’s A Line." —Publisher's Weekly