Seaweed Chronicles: A World at the Water’s Edge (Hardcover) 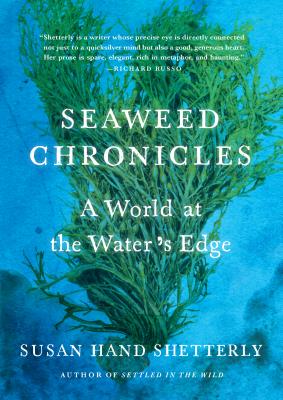 Seaweed Chronicles: A World at the Water’s Edge (Hardcover)


Usually Ships in 1-5 Days
“You might not expect unfettered passion on the topic of seaweed, but Shetterly is such a great storyteller that you find yourself following along eagerly.” —Mark Kurlansky

“Seaweed is ancient and basic, a testament to the tenacious beginnings of life on earth,” writes Susan Hand Shetterly in this elegant, fascinating book. “Why wouldn’t seaweeds be a protean life source for the lives that have evolved since?” On a planet facing environmental change and diminishing natural resources, seaweed is increasingly important as a source of food and as a fundamental part of our global ecosystem.

In Seaweed Chronicles, Shetterly takes readers deep into the world of this essential organism by providing an immersive, often poetic look at life on the rugged shores of her beloved Gulf of Maine, where the growth and harvesting of seaweed is becoming a major industry. While examining the life cycle of seaweed and its place in the environment, she tells the stories of the men and women who farm and harvest it—and who are fighting to protect this critical species against forces both natural and man-made. Ideal for readers of such books as The Hidden Life of Trees and How to Read Water, Seaweed Chronicles is a deeply informative look at a little understood and too often unappreciated part of our habitat.
Susan Hand Shetterly has written about wildlife and wetlands for more than thirty years, in both articles and books, including Settled in the Wild, acollection of essays. She lives in rural Maine, where she works to save habitat.

“You might not expect unfettered passion on the topic of seaweed, but Shetterly is such a great storyteller that you find yourself following along eagerly.”
—Mark Kurlansky

“After reading Susan Hand Shetterly’s Seaweed Chronicles, chances are that you’ll look at sushi rolls and the brackish tangles of seaweed washed up on beaches in a new light. Seaweed Chronicles is a fascinating portrait of this valuable, increasingly threatened resource and a passionate plea for its wise management. It’s a beautiful book, both educational and inspirational . . . Shetterly is a wise, attentive observer, open to the wonders of nature. Although generally more lyrical than didactic, she helpfully frontloads the book with important facts about seaweeds. Seaweed Chronicles adds up to a persuasive and loving argument for 'a new model of how to manage ocean resources that doesn’t edge them toward oblivion.'”
—Heller McAlpin, Washington Post

“Ms. Shet­terly writes beau­ti­fully about the in­ter­con­nect­ed­ness of hu­mans and an­i­mals and the nat­ural en­vi­ron­ment that we share. The twinned con­cepts of com­mu­nity and be­long­ing are cen­tral to this story. By ex­plor­ing the land where we live, we can be­gin to un­der­stand our place in the world. Sea­weed Chron­i­cles is an el­egy to en­vi­ron­mental­ism and to the in­di­vid­u­als in Ms. Shet­ter­ly’s lo­cal com­mu­nity who are com­mit­ted to the stew­ard­ship of coastal Maine’s nat­ural habi­tat. In the end, this is not about turn­ing back the clock or call­ing for a global shift in be­hav­ior, but about a phi­los­o­phy. Sea­weed Chron­i­cles is a lo­cal af­fair and, as such, gives more jus­tice to Ms. Shet­ter­ly’s en­deavor and closes in on some­thing real. 'At­ten­tion,' Si­mone Weil once wrote, 'is the rarest and purest form of gen­eros­ity.' Ms. Shet­terly is sim­ply urg­ing us to pay at­ten­tion to na­ture, to live de­lib­er­ately, to take stock of the things around us that we don’t want to lose. There may be big­ger chal­lenges in the world to­day than the grow­ing and har­vest­ing of sea­weed, but the re­spon­si­bil­ity and care—the pay­ing at­ten­tion—that the in­di­vid­u­als in Ms. Shet­ter­ly’s seascape rep­re­sent en­dow us with the for­ti­tude to do the same.”
—Wall Street Journal

“Nature writer Shetterly details why this hardy alga deserves safeguarding. In evocative prose, she describes seaweed’s role in the environment, especially in her coastal home of “Downeast Maine,” and the people who study, harvest, sell, eat and protect it.”
—Scientific American

“A lovely, first-person consideration of the diaphanous organisms—and an evaluation of their environmental history and promise: a carbon-absorbing environmental superhero, macro-algae biofuel may fuel your VWs and Hondas in the future, to boot.”
—Vogue

“Maine is linked to two profoundly important writers of the 20th century, E. B. White and Rachel Carson. Shetterly reminds me of both.”
—The Bangor Daily News

Praise for Settled in the Wild by Susan Hand Shetterly:

“Shetterly is a writer whose precise eye is directly connected not just to a quicksilver mind but also a good, generous heart. Her prose is spare, elegant, rich in metaphor, and haunting.”—Richard Russo

“With this tender and tough book, Shetterly creates an offering of native awareness that deserves to be placed alongside Aldo Leopold, Marjorie Stoneman Douglas, and Noel Perrin, all writers of community, insight and resolve.”—Terry Tempest Williams

“There is magic in the way Shetterly has proceeded into her life—with daily awe and hunger—and there is generosity, eloquence, and great intelligence in this telling.”—Rick Bass

“With wisdom and leavening humor, Susan Hand Shetterly tells tales of a small town and the woods around it, of her family and neighbors, two-legged and four, of the sound of wind and the cacophony of silence.”—Richard Louv

“Settled in the Wild draws a beautiful portrait of life lived in utter harmony with the natural world—life as it ought to be lived.”—Alice Waters

“What a beautiful little book. It reads like you're listening to water flowing over stones. Shetterly writes with great detail and understanding, and you feel immersed in her world.”—Lynne Cox