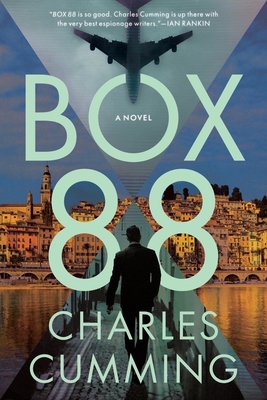 One of Parade's Most Anticipated Books of 2022!

Lachlan Kite is a member of BOX 88, an elite transatlantic black ops outfit so covert that not even MI6 and the CIA are certain of its existence — but even the best spy can’t anticipate every potential threat in a world where dangerous actors lurk around every corner. At the funeral of his childhood best friend, Lachlan falls into a trap that drops him into the hands of a potentially deadly interrogation, with his pregnant wife, also abducted, being held as collateral for the information he’s sworn on his own life to protect.

Thirty years earlier Lachlan, then just out of the upper class boarding school where he was reared, was BOX 88’s newest recruit. In the haze of a gap year summer, in which the study of spycraft was intertwined with a journey of self-discovery, he cut his teeth on a special assignment on the coast of France, where a friendship allowed him special access to one of Iran’s most dangerous men. Today, Lachlan’s nostalgia for the trip is corrupted by recollection of the deceit that accompanied it but, in order to save his family, he’ll be forced to revisit those painful memories one last time.

A pulse-pounding narrative that straddles two eras — 1989 and 2020 — BOX 88 is a “wonderfully taut, exciting and up-to-date spy thriller” that introduces a compelling new character and a captivating international storyline (Spectator, Books of the Year).

BOX 88 is his tenth novel, the start of a new series featuring Lachlan Kite.

JUDAS62 is the next book in the series.

The suspense is palpable, the characters flawed but sympathetic in their own ways and the story gripping. In a month of really excellent reads, BOX 88 is a clear standout.

The plot—anchored in full-bodied portraits of a small cast of characters confronted with the inescapable way the political and the personal are entangled—is intricate but coherent, taking readers down a chilling road of recent history, vividly depicted. The result is a believable plot undergirded by complex characters and profound questions. The gold standard in espionage fiction.
— Kirkus STARRED REVIEW

BOX 88 is at once rivettingly suspenseful and psychologically complex, a rare and rewarding combination. After John Le Carré died, there was much speculation about who, if anyone, could fill the space left by his departure. This series debut indicates that the spy-story genre is in safe and very talented hands.

Box 88 is a masterpiece of plotting and character, Cumming’s best novel to date. If you haven't yet had the pleasure of reading him, then do so immediately.
— Dan Fesperman

A wonderfully taut, exciting and up-to-date spy thriller.
— Spectator, Books of the Year

An ambitious fusion of coming-of-age novel and gripping espionage thriller.
— Financial Times, Books of the Year