The Yank: The True Story of a Former US Marine in the Irish Republican Army (Hardcover) 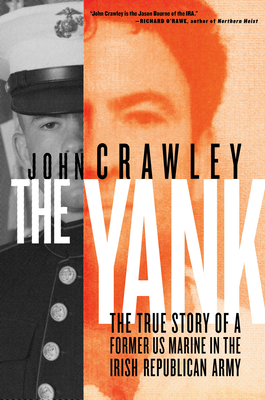 The Yank: The True Story of a Former US Marine in the Irish Republican Army (Hardcover)


On Our Shelves Now
1975: A young Irish-American man joins an elite US Marine unit to get the most intensive military training possible — then joins the Irish Republican Army, during the days of some of the bloodiest fighting ever in the Irish-British conflict . . .

The Irish "Troubles" were at a murderous fever pitch when John Crawley volunteered for the IRA. Bloody Friday, Bloody Sunday, the bombing of the British Houses of Parliament, and other deadly incidents had recently unfolded or were about to ... Civilian casualties were common as British soldiers, Republican militants (who wanted the UK out of Northern Ireland) and Unionist police and militants (who wanted to remain in the UK), engaged in gun battles and car bombing throughout Northern Ireland. The death toll numbered over 1,000.

The IRA split over how to react between the old-line IRA, and the new Provisional IRA — the Provos, mostly impassioned young men who were not hesitant to resort to violence.

In a powerful, brutally honest, no-holds-barred recounting of his experience, John Crawley details, first, the grueling challenges of his Marine Corps training, then how he put his hard-earned munitions and demolitions skills to use back in Ireland in service of the Provos. It is a story that will see him running guns with notorious American mobster — and secret IRA fundraiser — Whitey Bulger; running, under cover of night, from safe house to safe house in the Irish countryside, one step ahead of British troops; being captured, imprisoned, and being part of a mass escape attempt; fending off a recruitment offer from the CIA; and being one of the masterminds behind a campaign to take out London's electrical system.

Along the way, Crawley is blisteringly candid about the memorable people he worked with, including behind-the-scenes portrayals of revered IRA leader Martin McGuinness, and of the psychopathic Whitey Bulger, as well as others in the Boston IRA support network. There are vivid portraits of colleagues and enemies, and Crawley is unflinching in his commentary on IRA leadership and their tactics, both military and political.

Through it all comes the steadfast voice of a man on a mission, providing an evocative, detailed, and passionate recounting of where that mission led him and why — as well as why, to this day, he remains ready to serve.
John Crawley was born in New York to Irish immigrant parents, and moved to Ireland as a young teenager to attend school. Inspired there by the struggle for Irish freedom against British rule in the North of Ireland, he returned to America to receive military training in an elite, special forces "Recon" unit of the US Marine Corps. Afterwards, he returned to Ireland to volunteer for the IRA and conducted many missions, including gun-running from the US, working with Boston criminal head Whitey Bulger. Crawley would be captured and imprisoned twice, both in Ireland and in England, while on major missions, done in both times by informers. He is now retired and married with a family, and lives in County Monaghan, Ireland. He remains as committed as ever to the ending of British rule in Ireland and the establishment of a united Irish Republic.
"[The Yank] reads like a movie script, full of mobsters, smuggling, sabotage, and murder....One thing it doesn’t have, though, is doubt." -- The New York Daily News

"At its core, The Yank is an adventure filled with scenes of combat, espionage, and smuggling... riveting..." -- Coffee or Die Magazine

“Crawley delivers a full-throated and unrepentant call for a united Ireland in this lucid chronicle… A clear-eyed look, from the inside, at a group willing to risk it all for a cause.” -- Publishers Weekly

"A foot soldier in the Irish Republican Army delivers an unrepentant memoir. ... An in-the-trenches story of life as an ordinary soldier in a complicated set of circumstances." -- Kirkus

"Thrilling... Crawley gets the reader’s heart pumping as he describes escaping shootouts with enemy troops, battling a hurricane in the North Atlantic while running guns from the U.S. to Ireland, and telling off a CIA agent who tried recruiting him." -- The American Military News

"Straightforward and unsentimental...Crawley provides enough context to understand the realities on the ground in the Ireland of the 1980s." -- Shelf Awareness

"His life makes for an enjoyable, worthwhile study...." -- The Washington Independent Review of Books

"The Yank is an extraordinary piece of work. No sentiment or self-pity; hardboiled and disarmingly direct. A compelling read.” — Patrick McCabe, author of The Butcher Boy

"John Crawley is the Jason Bourne of the IRA." — Richard O'Rawe, author of Northern Heist