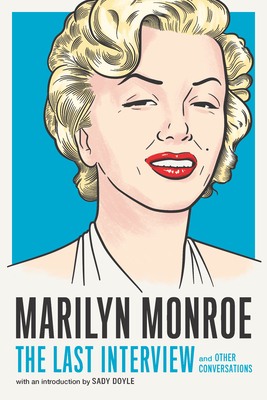 
Usually Ships in 1-5 Days
"I'm so many people. They shock me sometimes. I wish I was just me!" --Marilyn Monroe

Nearly sixty years after her death, Marilyn Monroe remains an icon whom everyone loves but no one really knows. The conversations gathered here--spanning her emergence on the Hollywood scene to just days before her death at age 36--show Monroe at her sharpest and most insightful on the thorny topics of ambition, fame, femininity, desire, and more. Together with an introduction by Sady Doyle, these pieces reveal yet another Marilyn: not the tragic heroine she's become in the popular imagination, but a righteously and justifiably angry figure breaking free of the limitations the world forced on her.
Marilyn Monroe (1926-1962) was an actress, model, global celebrity, and one of the twentieth century's most famous pop icons. Born in Los Angeles as Norma Jeane Mortenson, she appeared in her first movie at age 21 and achieved breakout success in 1953. Monroe went on to star in more than 20 films, including Gentleman Prefer Blondes, The Seven Year Itch, and Some Like it Hot.

Sady Doyle is the author of Trainwreck and Dead Blondes and Bad Mothers. Her work has appeared in In These Times, The Guardian, Elle.com, The Atlantic, Slate, Buzzfeed, Rookie, among other publications. She is the founder of the blog Tiger Beatdown, and won the first-ever Women's Media Center Social Media Award. She's been featured in Rookie: Yearbook One and Yearbook Two, and contributed to the Book of Jezebel. She lives in upstate New York.
"I owe Marilyn Monroe a real debt . . . She was an unusual woman, a little ahead of her times. And she didn't know it." —Ella Fitzgerald

"Marilyn was a sensitive, misunderstood person, much more perceptive than was generally assumed. She had been beaten down, but had a strong emotional intelligence—a keen intuition for the feelings of others, the most refined type of intelligence." —Marlon Brando

"The minute that camera turned on her, she became this incredible creature. . . She was just herself, and she was absolutely dazzling as herself." —Lauren Bacall