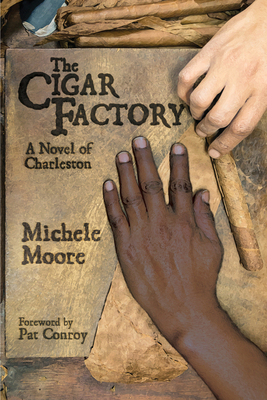 An empowering story of families and friendships forged through struggle, loss, and redemption

"The sun leaned for down bringing shade to the waterfront," begins Michele Moore's entrancing debut novel, harkening back to an era when the legendary fishermen of Charleston's Mosquito Fleet rowed miles offshore for their daily catch. With evocative dialect and remarkable prose, The Cigar Factory tells the story of two entwined families, both devout Catholics--the white McGonegals and the African American Ravenels--in the storied port city of Charleston, South Carolina, during the World Wars. Moore's novel follows the parallel lives of family matriarchs working on segregated floors of the massive Charleston cigar factory, where white and black workers remain divided and misinformed about the duties and treatment received by each other.

Cassie McGonegal and herniece Brigid work upstairs in the factory rolling cigars by hand. Meliah Amey Ravenel works in the basement, where she stems the tobacco. While both white and black workers suffer in the harsh working conditions of the factory and both endure the sexual harassment of the foremen, segregation keeps them from recognizing their common plight until the Tobacco Workers Strike of 1945. Through the experience of a brutal picket line, the two women come to realize how much they stand to gain by joining forces, creating a powerful moment in labor history that gives rise to the Civil Rights anthem, "We Shall Overcome."

Moore's extensive historical research included interviews with her own family members who worked at the cigar factory, adding a layer of nuance and authenticity to her empowering story of families and friendships forged through struggle, loss, and redemption. The Cigar Factory includes a foreword by New York Times best-selling author and Story River Books editor at large Pat Conroy.

Michele Moore has served as a fellow in the English Department at Piedmont College in Demorest, Georgia. She was a 2006 finalist for the Bellwether Prize for Literature. Her creative nonfiction has been broadcast on Georgia Public Radio and published in the Louisville Review, Habersham Review, ACM (Another Chicago Magazine), Groundwater, and O, Georgia. She has also won awards and grants from the Kentucky Foundation for Women, the Kentucky Arts Council, and the Kentucky Chapter of the National Society of Arts and Letters.