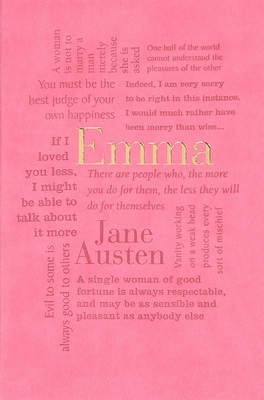 “She was one of those who, having once begun, would be always in love.”

Best-selling Victorian author Jane Austen has created many memorable female characters, with intriguing Emma Woodhouse being perhaps the most popular. Emma, a matchmaker at heart, is obsessed with love and romance--for others. As for her own love life, she wants nothing of it. She even feels repulsed by the amorous declarations she receives. But as her matchmaking schemes go awry, and her friend Harriet shares her feelings toward a certain friend, Mr. Knightley, Emma soon becomes aware of her own heart’s longings.

* This beautiful book comes with luxurious endpapers, a beautiful and stylish heat-burnished cover, and is a convenient 5 x 7 trim size for easy handling.

* The classic has sold millions of copies since its first publication.

Emma has been one of the most charming coming-of-age love stories for nearly two centuries.

About the Word Cloud Classics series:

Classic works of literature with a clean, modern aesthetic! Perfect for both old and new literature fans, the Word Cloud Classics series from Canterbury Classics provides a chic and inexpensive introduction to timeless tales. With a higher production value, including heat burnished covers and foil stamping, these eye-catching, easy-to-hold editions are the perfect gift for students and fans of literature everywhere.

Born December 16, 1775, Jane Austen is one of the most celebrated authors of the English language. Her fiction is known for its witty satires on English society. Austen wrote anonymously during her life and wasn't widely recognized as a great English writer until after her death in 1817.