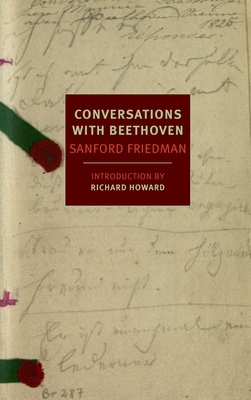 By Sanford Friedman, Richard Howard (Introduction by)
$16.95
On Our Shelves Now

Deaf as he was, Beethoven had to be addressed in writing, and he was always accompanied by a notebook in which people could scribble questions and comments. Conversations with Beethoven, in a tour de force of fictional invention, tells the story of the last year of Beethoven’s life almost entirely through such notebook entries: Friends, family, students, doctors, and others attend to the volatile Maestro, whose sometimes unpredictable and often very loud replies we infer. A fully fleshed and often very funny portrait of Beethoven emerges. He struggles with his music and with his health; he argues with and insults just about everyone. Most of all, he worries about his wayward—and beloved—nephew Karl. A large cast of Dickensian characters surrounds the great composer at the center of this wonderfully engaging novel, which deepens in the end to make a memorable music of its own.

Sanford Friedman (1928–2010) was born in New York City. After graduating from the Horace Mann School and the Carnegie Institute of Technology, he was stationed as a military police officer in Korea, earning a Bronze Star. He began his career as a playwright and theater producer, and was later a writing instructor at Juilliard and SAGE (Services and Advocacy for GLBT Elders). “Ocean,” a chapter from Friedman’s first novel, Totempole, was serialized in Partisan Review in 1964 and won second prize in the 1965 O. Henry Awards. Totempole (1965; available as an NYRB Classic) was followed by the novels A Haunted Woman (1968), Still Life (1975), and Rip Van Winkle (1980). At the time of his death, Friedman left behind the unpublished manuscript for Conversations with Beethoven.

Richard Howard is the author of seventeen volumes of poetry and has published more than one hundred fifty translations from the French, including, for NYRB, Marc Fumaroli’s When the World Spoke French, Balzac’s Unknown Masterpiece, and Maupassant’s Alien Hearts. He has received a National Book Award for his translation of Les Fleurs du Mal and a Pulitzer Prize for Untitled Subjects, a collection of poetry. His most recent book of poems, inspired by his own schooling in Ohio, is A Progressive Education (2014).

"Conversations with Beethoven is a perfect portrait of an irascible genius.  I always wanted to write a book about the tragic relationship between Beethoven and his nephew Karl, but it seems Sanford Friedman got there first. By relying on the format of the conversation books, Friedman cleverly cuts through all the tedious loquaciousness of the period; what we're left with are the revelatory fossils of the last year of Beethoven's anguished life." —Edmund White

"Conversations with Beethoven is unclassifiable—a novel comprised exclusively of 'oral' speech, that reads rapidly on the page like a kind of music-poetry; a prose poem of numerous voices, in which passion (both declared and undeclared) is the driving force; an intimately detailed double portrait of Beethoven and his nephew Karl that will linger long in the memory, like the most beautiful and enigmatic music." —Joyce Carol Oates

"...a perfect grasp of ebbing mortality, in all its tedium and elusive clarity, informs the depiction of Beethoven’s final year...The novel’s brilliance lies in the discovery of the flawed human behind immortal genius: Friedman’s Beethoven is just like us." —Publishers Weekly starred review

“The manuscript of Conversations with Beethoven was left unpublished at [Friedman’s] death; NYRB Classics has done a service in bringing it to light, since intelligent novels on the subject of composers—or musicians of any kind—rarely come along.” —Alex Ross, The New Yorker

"[A] novel that is constructed from a very clever and simple idea: the notes that people had to write in order to communicate with the deaf composer, whether face to face or over long distances….until now [Friedman] never found a publisher for this book, which is a scandal. But at least NYRB Classics (which has never published a duff book since it came into being, so far as I know) has rescued it from limbo…. Friedman’s fiction is unconventional and rigorously so – a bit like his subject’s music, you might say – and at times as moving in the same way, as it, too, exploits silences and pauses….It is an astonishing achievement."  —Nicholas Lezard, New Statesman

“An ingenious re-imagining of [the] notebooks from the last year of the composer’s life…the book offers a rare pleasure in its clever collaboration with the reader, who is asked to imagine not just Beethoven’s words but also his gestures, tone, intentions, frustrations and the very look in his eye as he drives himself toward his final music, enshrouded in silence. As a reader, there’s a lot to be gained by making this kind of imaginative investment. Beethoven, like his music, flows through each of our minds differently, a shifting, mercurial meaning.” —Rick Whitaker, The Washington Post


“[A] brilliant posthumous novel… The narrative structure of Conversations with Beethoven is radically inventive, and so too are the various prosodic tools that Friedman uses to identify the individual speakers: The work could be a play if it weren’t also a novel, and it could be a film script if it weren’t also a play. In the end, its extraordinariness owes everything to the ordinariness of every day conversation. Smallness is rarely so big.” —Joseph Grigely, ArtForum

“[A] brilliant posthumous novel… The narrative structure of Conversations with Beethoven is radically inventive, and so too are the various prosodic tools that Friedman uses to identify the individual speakers: The work could be a play if it weren’t also a novel, and it could be a film script if it weren’t also a play. In the end, its extraordinariness owes everything to the ordinariness of every day conversation. Smallness is rarely so big.” —Joseph Grigely, ArtForum