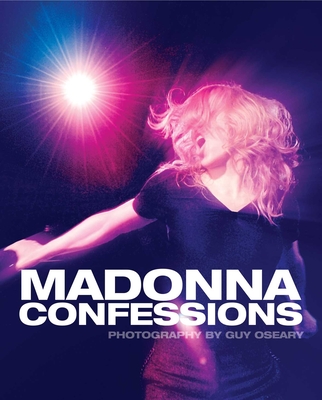 
Usually Ships in 1-5 Days
In conjunction with this summer's most talked about concert, Madonna's highly anticipated "Sticky and Sweet" Tour, powerHouse Books will release Madonna Confessions, the official book of quintessential images taken by über-manager Guy Oseary during the course of over 50 performances around the world during the Material Girl's sold out 2006 Confessions Tour.

With over 250 never-before-seen images, the book showcases various provocative themes from that show including an iconographic equestrian opening to an urban Bedouin segment and on to glam punk and disco fever.

The photographs celebrate what the New York Times called "the sheer spectacularity of her physical form" along with show stopping highlights and groundbreaking staging. Oseary, who is also Madonna's manager and has worked with her for the past twenty years, traveled with the artist and was given unprecedented access to each performance. As a result, the photographs in Madonna Confessions capture the essence, sheer energy, and excitement that came alive onstage every night. The photographs were each lovingly handpicked by Oseary and Madonna and are interspersed with quotes from Madonna. Long considered one of the most exciting live performers of our era, Madonna Confessions is a visual delight that highlights the multi-Grammy winner and Rock and Roll Hall of Fame inductee's astounding career.

"powerHouse is delighted to collaborate with one of the world's greatest live performers; Guy Oseary's exclusive access to each night's Confessions show allowed him the opportunity to capture unparalleled iconic moments in live performance photography. The intimacy and the sweep of the work put you front row center of an incredible experience."
-Daniel Power, CEO of powerHouse Books.
Guy Oseary is the CEO of Maverick and Madonna’s manager. He has worked closely with Madonna for almost two decades, and was the only individual permitted to take photographs both on and backstage on the landmark Sticky & Sweet Tour. Oseary’s first book, Madonna Confessions, was published by powerHouse in 2008.