A Different Distance: A Renga (Paperback) 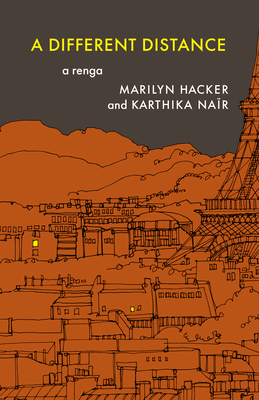 A Different Distance: A Renga (Paperback)

“Friends, poets, and Paris residents Marilyn Hacker and Karthika Naïr wrote a renga (a linked poem) over the course of a year, from March 2020 to March 2021 during the full lockdown. Reading this collection is a lovely, lovely experience.”
— Jen Wills Geraedts, Beagle and Wolf Books & Bindery, Park Rapids, MN

An Indie Next Selection for December 2021

In March 2020, France declared a full lockdown to prevent the spread of the coronavirus. Shortly thereafter, poets and friends Marilyn Hacker and Karthika Na r--living mere miles from each other but separated by circumstance, and spurred by this extraordinary time--began a correspondence in verse. Renga, an ancient Japanese form of collaborative poetry, is comprised of alternating tanka beginning with the themes of tōki and tōza: this season, this session. Here, from the "plague spring," through a year in which seasons are marked by the waxing and waning of the virus, Hacker and Na r's renga charts the "differents and sames" of a now-shared experience. Their poems witness a time of suspension in which some things, somehow, press on relentlessly, in which solidarity persists--even thrives--in the face of a strange new kind of isolation. Between "ten thousand, yes, minutes of Bones," there's cancer and chemotherapy and the aches of an aging body. There is grief for the loss of friends nearby and concern for loved ones in the United States, Lebanon, and India. And there is a deep sense of shared humanity, where we all are "mere atoms of water, / each captained by protons of hydrogen, hurtling earthward." At turns poignant and playful, the seasons and sessions of A Different Distance display the compassionate, collective wisdom of two women witnessing a singular moment in history.