The Children in Room E4: American Education on Trial (Paperback) 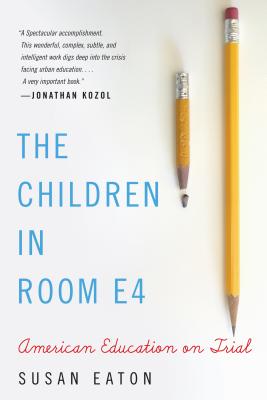 The Children in Room E4: American Education on Trial (Paperback)


Usually Ships in 1-5 Days
With our nation's urban schools growing more segregated every year, Susan Eaton set out to see whether separate can ever really be equal. An award-winning journalist, Eaton spent four years at Simpson-Waverly Elementary School, an all-minority school in Hartford, Connecticut. Located in the poorest city in the wealthiest state in the nation, it is a glaring example of the great racial and economic divide found in almost every major urban center across the country.

The Children in Room E4 is the compelling story of one student, one classroom, and one indomitable teacher, Ms. Luddy. In the midst of Band-Aid reforms and hotshot superintendents with empty promises, drug dealers and street gangs, Ms. Luddy's star student, Jeremy, and his fellow classmates face tremendous challenges both inside and outside of a school cut off from mainstream America.

Meanwhile, across town, a team of civil rights lawyers fight an intrepid battle to end the de facto segregation that beleaguers Jeremy's school and hundreds of others across America.

From inside the classroom and the courtroom, Eaton reveals the unsettling truths about an education system that leaves millions of children behind and gives voice to those who strive against overwhelming odds for a better future.
Susan Eaton, an award-winning journalist specializing in education, is the research director at the Charles Hamilton Houston Institute for Race and Justice at Harvard, where she received her doctorate in education policy.
"[Eaton] has written a book that goes to the heart of who we are as a nation, of what we mean when we ask our children to pledge allegiance to the flag of 'one nation, indivisible.'"—The Boston Globe