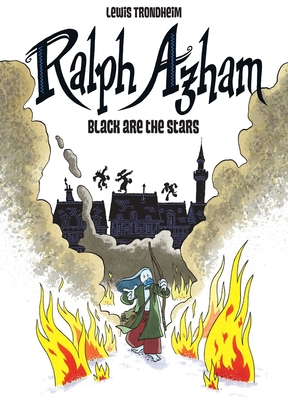 This is book number 1 in the Ralph Azham series.

From the award-winning mind of cartoonist Lewis Trondheim comes the expansive and rich anthropomorphic medieval world of Ralph Azham. After failing the test of the Chosen One as a young duck, Ralph had a tough time growing up as the village pariah, often getting into trouble due to an innate extra sense that’s rather unbelievable, embarrassing, and unfortunate. That was only compounded by the constant visit of spirits that only he, Ralph, could see. Cut to today, his village is threatened by a vicious Horde, an apocalyptic flood may take the life of Ralph's only supporter, his father, and the Wise Men's Counsel are out for Ralph's hide after rumors he had his way with one of their daughters. Ultimately Ralph must leave the village and unlock the secrets of his childhood as he journeys to the Kingdom of Astolia, but not before he takes a young ward, Raoul, who bears an uncanny similarity to Ralph. It's a sprawling story of fathers and their sons, magic, mysticism, with plenty of action, adventure, and signature Trondheim madcap humor.

The phenomenal Lewis Trondheim is never where you next expect him. As an artist and writer, Trondheim has earned an international following as one of the most inventive, versatile, and prolific graphic authors. From autobiography to adventure, from bestselling fantasy and children's books to visual essays, Trondheim's unique, seminal imagination consistently dazzles. His work has won numerous awards, including the Angoulême prize for best series with Mc Coney and he also co-created the titanic fantasy epic Dungeon with Joann Sfar.
He is one of the founding members of the alternative publishing house L'Association, a proving ground for many of the greatest talents in European comics working today. He is also the editorial director of a new imprint called Shampooing, dedicated to comics for all ages.

Lewis lives in the South of France with his wife and two children.