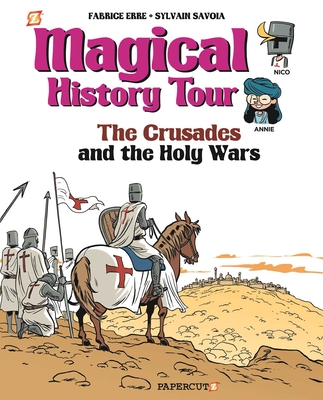 This is book number 4 in the Magical History Tour series.

Modern day kids Annie and Nico go on a magical history tour back to the Middle Ages to find out what started the Crusades—and why there were so many of them. They travel to Jerusalem (where it all started) and they meet kings and popes and emperors and sultans... including Richard the Lionheart and his famous adversary Saladin. Along the way, Nico discovers that the Crusades weren't just about religion and the Holy Wars weren't just between Christians and Muslims. Experience the ins and outs of this confusing time with Annie and Nico as the helpful guides in this pocket-sized book.

Fabrice Erre, born in 1973 in France, is an author and teacher of comics, as well as an accomplished historian. Through his comics, he seeks above all to parody human behavior, teasing out our little personal weaknesses and our vulnerability to manipulation by the masses. Most recently, putting his history background to good use, Erre has teamed up with artist Sylvain Savoia to create the series THE THREAD OF HISTORY, set on bringing the past to vivid life for younger readers.

Born in 1969, Sylvain Savoia grew up in France, and discovered comicbooks at a young age. In 1989, he registered at the Saint-Luc art school in Brussels. Savoia enjoys a prolific international career illustrating comics.