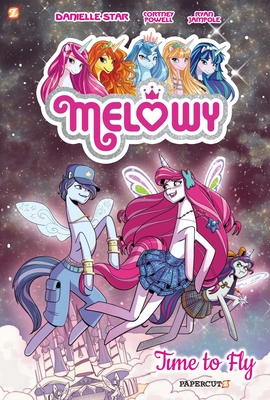 This is book number 3 in the Melowy series.

The stars of the new best-selling series of chapter books from Scholastic are five flying unicorns known as Melowies. Together they attend a very special magical school known as Destiny, where they each learn to control their very own special power. But right now the high-flying Aerobatics competition between the magical schools of Destiny and Chance is about to begin, and Cleo and Electra are representing Destiny. Cleo has extra motivation as Toby, her friendly crush from the Night Realm is also in the competition. But could a jealous Eris sidetrack Cleo and Toby from reaching the finish line? To win Toby’s affection, Eris acquires a mysterious locket from Destiny’s resident librarian Circe, who has her own sinister motives. What dark forces await the Melowies?