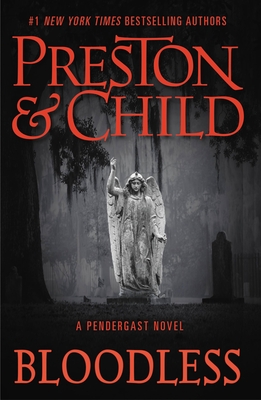 This is book number 21 in the Agent Pendergast Series series.

A fabulous heist:
On the evening of November 24, 1971, D. B. Cooper hijacked Flight 305—Portland to Seattle—with a fake bomb, collected a ransom of $200,000, and then parachuted from the rear of the plane, disappearing into the night…and into history.

A brutal crime steeped in legend and malevolence:
Fifty years later, Agent Pendergast takes on a bizarre and gruesome case: in the ghost-haunted city of Savannah, Georgia, bodies are found with no blood left in their veins—sowing panic and reviving whispered tales of the infamous Savannah Vampire.

A case like no other:
As the mystery rises along with the body count, Pendergast and his partner, Agent Coldmoon, race to understand how—or if—these murders are connected to the only unsolved skyjacking in American history. Together, they uncover not just the answer…but an unearthly evil beyond all imagining.
The thrillers of Douglas Preston and Lincoln Child "stand head and shoulders above their rivals" (Publishers Weekly). Preston and Child's Relic and The Cabinet of Curiosities were chosen by readers in a National Public Radio poll as being among the one hundred greatest thrillers ever written, and Relic was made into a number-one box office hit movie. They are coauthors of the famed Pendergast series and their recent novels include Fever Dream, Cold Vengeance, Two Graves, and Gideon's Corpse. In addition to his novels, Preston writes about archaeology for the New Yorker and Smithsonian magazines. Lincoln Child is a former book editor who has published five novels of his own, including the huge bestseller Deep Storm. Readers can sign up for The Pendergast File, a monthly "strangely entertaining note" from the authors, at their website, www.PrestonChild.com. The authors welcome visitors to their alarmingly active Facebook page, where they post regularly.