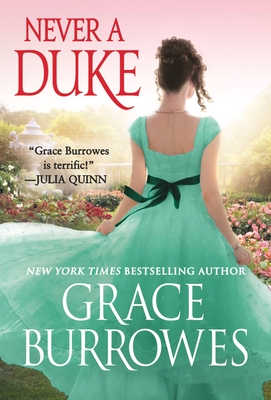 A proper lady must choose between society or the untitled gentleman who has stolen her heart in this captivating Regency romance perfect for fans of Bridgerton.

Ned Wentworth will be forever grateful to the family that plucked him from the streets and gave him a home, even though polite society still whispers years later about his questionable past. Precisely because of Ned’s connections in low places, Lady Rosalind Kinwood approaches him to help her find a lady’s maid who has disappeared.

Rosalind is too opinionated—and too intelligent—and has frequently suffered judgment at the hands of polite society. Despite her family’s disdain for Ned, Rosalind finds he listens to her and respects her. Then too, his kisses are exquisite. As the investigation of the missing maids becomes more dangerous, both Ned and Rosalind will have to risk everything—including their hearts—if they are to share the happily ever after that Mayfair’s matchmakers have begrudged them both.


Grace Burrowes grew up in central Pennsylvania and is the sixth of seven children. She discovered romance novels in junior high and has been reading them voraciously ever since. Grace has a bachelor's degree in political science, a bachelor of music in music history (both from the Pennsylvania State University), a master's degree in conflict transformation from Eastern Mennonite University, and a juris doctor from the National Law Center at George Washington University. Grace is a New York Times and USA Today bestselling author who writes Georgian, Regency, Scottish Victorian, and contemporary romances in both novella and novel lengths. She enjoys giving workshops and speaking at writers' conferences.
"Grace Burrowes is terrific!"—Julia Quinn, #1 New York Times bestselling author of the Bridgerton series

“A soft, sweet love between kind, thoughtful, and intelligent characters.”—Kirkus

“Burrowes expertly peels back her characters’ layers to reveal their inner depths while highlighting the facades they present to maintain their positions in London society. Regency fans will delight in this fast-paced mix of love, social commentary, and suspense.”—Publishers Weekly

“The mystery is intriguing, and it is a special delight to watch two social outsiders, both possessed of an independent spirit, determination, and a social conscience, triumph over adversity and find love… Highly recommended.”

"The flawed, realistic characters and their witty, flirtatious banter make for an immersive romance. Series fans will be delighted."—Publishers Weekly on How to Catch a Duke

"Readers will root for the fierce, resolute Constance and passionate Robert as they bond over their shared pasts and mutual determination to overcome adversity and stigma. Burrowes takes her series to new heights with this tender, turbulent romance."—Publishers Weekly, starred review on The Truth About Dukes

"The latest in
Burrowes's stunning Rogues to Riches Regency-era series shines as a standout in
the historical romance subgenre but is also a powerful story all on its
own...Highly recommended."—Library Journal, starred review, on A Duke by Any Other Name